You can imagine the comments and strange looks I get when I tell Italians that I don’t drink coffee.

Well I have the occasional one with milk or a frappe / iced coffee in summer but for all intents and purposes, you could say I drink coffee like a kid – completely watered down & not too often!

Given what I like to call my innate italian-ness, this has always come as a bit of a shock to even friends & acquaintances, but here? Most people respond with an almost disgusted, “Well what do you drink then?” & “But why don’t you drink it – what about just an espresso?” If I dont drink it, why would I have “just have an espresso??”

It always reminds me of the scene in My Big Fat Greek Wedding when the crazy aunt realises that – shock horror – Toula’s fiancé Ian is a vegeterian. She is outraged and says, “He don’t eat NO meat??”. Then there’s an awkward silence across the room. She calmly recovers with, “That’s ok, I make lamb!”

That scene comes to mind every time someone says to me, “You don’t drink coffee?!!!”

I am a big tea drinker and sometimes I confess this around these parts – but not very often. It’s at my own peril really, for coffee is the ONLY culture here.

I would confidently estimate that 90% of restaurants do not serve tea. In bars they do, but if you’ve ever walked into a bar in Italy in the morning you’d know that it’s just madness, with rows of people standing at the counter taking their coffee like a shot! I envision a Big Fat Greek Wedding “He don’t eat no meat” kind of scene should I quietly ask for…. “A cup of tea please”.

To be quite honest, I don’t even think the barista would even take his hand off the coffee machine to make one! Oh and another thing, strange looks are plentiful when you ask to drink it with milk. I’ve been told on more than one occasion, “Ma cosi non ti fa male?” – translation: won’t drinking it with milk make you sick? Um – pretty sure I’ve been drinking cups of it per day with milk for my whole life and it hasn’t killed me yet! But no – Italians argue that if you must drink tea, then it’s to be served only with lemon.

Which leaves me with no other real choice other than to secretly drink tea in the comfort of my own home! My local supermarket even stocks Twinings so my English Breakfast tastes just like it does at home.

Surprisingly though, there are a few tea rooms in the city. Well 2 that I know of (knock yourself out hey).

So you can imagine my delight then when one of my new Roman friends tells me she recently went to this cool place for brunch. Well, this got me thinking and I asked her if there is anywhere in Rome where you can have High Tea….

…..You guessed it – high tea does not exist in Rome – or anywhere in Italy for that matter (well except for tourists at a few big chain hotels). And for fair historical and cultural reason really. It certainly wasn’t a nation built on tea! Coffee is, and will always remain a way of life here.

My friend has lived in London so despite it being alien to locals here, she knew the concept. She told me of a couple of places in the city but lamented of how she misses good scones.

Well! Wouldnt you know it?? Guess who makes (fantastic!) scones regularly?? Me!

After discussing how much we love them & then the technique of making them at length, we decided that soon she will come round for scones with jam and cream at my apartment (which I can tell is on the fast track to becoming known as some Roman Secret Tea Society that will be talked about long after I’m gone in secret circles like an urban myth).

Needless to say, I love hosting parties and I do cook and bake a lot in Melbourne. Now so far, my cooking here has been fine. I have however, had a major disaster with baking here before. In my defence, I blame it on different produce and not being fully acquainted with the oven I was working with (a particular friend may disagree!).

This afternoon I decided it was time to brave baking for the first time in my apartment. I need to practice so that I make a good impression on my new friends or as we say here in Italy, una bella figura! I quickly learnt the term for self raising flour farina col lievito (which translates literally to flour with yeast) and ridiculously enough, the brand name for the flour I bought is Magic Flour and it guarantees on the packaging that all baked goods will magically rise! With that promise, off I baked! (Product marketing is so random here!)

The result, you ask? A great success! I admit that I will bake for a little less and on lower heat next time. But as they say, practice makes perfect and these pics are evidence of my tasty Made in Italy scones (with of course…. jam and cream)

Time for another cup of tea. Anyone? 🙂 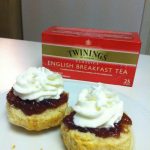 Scones with jam and cream 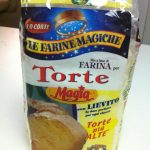