On a long weekend in Roma

It’s the first time in a long time I haven’t been in Melbourne for the Melbourne Cup long weekend (for my international readers, the country pretty much closes down for a horse race on the 1st Tuesday in November and most people take the Monday off as well!)

But I got to experience a long weekend in Rome too! Tuesday 1 November was All Saints Day and this religious day is marked with a giorno festivo or giorno di riposo (public holiday) and of course many Romans took the Monday – like we do in Melbourne for the Cup! I find it strange that in the seat of the Roman Catholic church All Saints Day is a public holiday and Good Friday isn’t! Italy never seems to amaze with absurdity!

Well, I had a great long weekend – in fact, I went to my first Italian rock concert at Rome’s Pallalottomatica (try pronouncing that & fast!)

I Modà are a soft rock band – 5 hot Italian guys singing about ‘l’amore’ – of course they sucked me in!!

Streamers going off at i Moda concert at the Pallalottomattica

My cousin is also a massive fan & we have hardly been able to contain our excitement in the month leading up to the show. They didn’t disappoint!

Then on Tuesday (to mark All Saints Day of course!) a friend and I went on a little road trip – well let’s say 40km out of Rome (clearly I’ve become one of those people who live in the city & anything that resides approx 5km out, is regional!)

Having said that, Ariccia is actually regarded as a regional town of Lazio despite its proximity to Rome.

The main reason to visit this town?
Well, it’s regarded as the home of porchetta… rolled pork that is slowly roasted with herbs and wild fennel.

With a population of about 18,000, it lies in the Castelli Romani area (colloquially referred to i Castelli in Roman dialect) which is renowned for the production of wine, in particular the white wine of Frascati (which I’ve been drinking quite a bit of – only to immerse myself fully into roman culture!) It’s also a very busy student hub as it is home to an international campus of America’s Auburn University.

Ariccia is the centre of a region that was extremely important in Roman and pre-Roman mythology and was one of the oldest cities of ancient Latium. As the then-leader of the Latin League it was actually a serious contender against Rome during the early days of the Roman Republic. I saw for myself why against Rome, this small town never really stood a chance!

Around Rome you can buy la Porchetta d’Ariccia in many places so a couple of weeks ago when my friend Laura was in town visiting… we thought to try it for the first time. It was fantastic!! The best porchetta I’d ever eaten. Well that is until I went to Ariccia.

Trying porchetta d'ariccia for the first time in Rome

On arriving into this beautiful small town you can tell it takes its pork seriously! You can buy porchetta everywhere! The main square, Piazza di Corte was designed by Bernini. And I should’ve know having noticed the church in the piazza, Santa Maria dell’Assunzione possessed a striking resemblance to a ‘little old’ church in Rome’s historical centre known as the Pantheon!

We walked though the piazza and down the main street and sat a little cafe to try the local specialty. It was phenomenal! Served with fresh bread, I was in heaven! Delicately seasoned, succulent pork with crispy crackling… need I say more?

On our way back to Rome we stopped at Castel Gandolfo, a really small town (population just under 9,000) made famous as the summer residence of the Pope and voted many times as one of the most beautiful towns in Italy.
We chose one of the cafes and sat for a hot chocolate and un dolce before facing the traffic home – referred to on a Sunday night or after a long weekend as il rientro (literally translates to the return – when all the Romans head back into the city after having escaped the mayhem for a few hours or a few days!)

And then as quickly as it arrived, the long weekend was over!

Well friends that’s all for now! 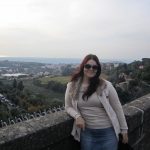 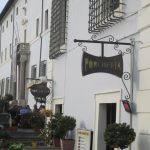 Porchetta for sale on every corner 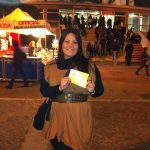 Getting ready to go into the arena! 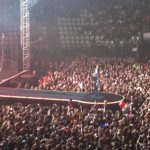 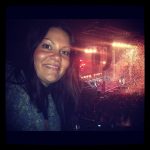 I Moda concert at the Pallalottomattica