Berlin: for the first – definitely not the last – time 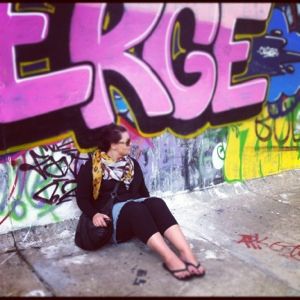 This week I excitedly packed my bags and made the 1:45 hour trek from Rome to Berlin to spend a few days with my sister Lara and friend Tania who have just embarked on a 3 month tour of Europe.

They are keeping a blog of their travels and in the spirit of story sharing, they are my guest bloggers for this post.

All I have to say is that Berlin is one of the most fantastic European capitals I have visited. It is a modern, eclectic, alternative and thriving metropolis. It’s a city with the most extraordinary history. For me the highlight and most moving experience was visiting the Holocaust Memorial and then remains of the Berlin Wall. Watching the wall come down as a child, I could not believe I was finally standing at the site of this living monument of freedom.

The more you unravel this city, the more you want. It oozes cool, embraces diversity and challenges the mainstream. And importantly for me, has the most phenomenal food and bar culture. In fact I did a walking food tour of the hip Kreuzberg area and will post about it a little later on.

My one disappointment? Not having my passport available to be stamped at Checkpoint Charlie. I blame the unification of Europe for the fact that as an EU citizen I can travel across the continent on an identity card. All the more reason to go back I guess!

This was my first, but I guarantee, not my last time to Berlin.

Signing off from Rome (and missing Berlin),
Baci
Maria

We arrived in Berlin after 2 hours sleep and 2 flights, and by the time we got into the city we were absolutely exhausted. Our room wasn’t ready, so, bleary eyed, we headed off to explore the city. We discovered Hackescher Markt where we met Tania’s friend Marie at a Spanish restaurant that served the best chorizo we have ever eaten!! (we know it’s a big call but we are sticking by it!) The afternoon catchup ended with a slow stroll back to our hotel, Häagen Dazs ice creams in hand (of course), and finally a much needed (and deserved) nanna nap.

We woke from our naps to a wonderful surprise. Maria Pasquale, aka Lara’s sister, aka miss @heartrome herself, had arrived! (although probably not to the welcome she had hoped for; with us rolling over in our sleep and grunting acknowledgement).

That night we met Tania’s other friend Mila for German fare at the restaurant where Marie works. A feed of Bratwurst and sauerkraut, and Cordon Bleu Schnitzel lined our stomachs for the big night ahead.

When we finished dinner, at midnight mind you, the fünf (five) of us bought our “way” beers (which are exactly what they sound like; beers to drink on the way), boarded a train at the most exciting subway station ever (think boom boxes, loud music and people dancing everywhere with their own “way” beers), and headed to Marie and Mila’s apartment for pre-drinks at 1am! We didn’t head out until 2am and it was still ‘early’ according to the locals!

Our first foray into German clubs was a place called Matrix that played electro and commercial house music in one room, and retro hits in another, ranging from “Scatman” & “Macarena” to “Hound dog” & “Let’s Twist Again”. You can guess where we stayed all night! We danced to every random hit and one hit wonder from the 60′s, 70′s, 80′s and 90′s, until we walked out into the morning light at 6am and decided that perhaps it was time to head home.

After a Sunday sleep in we reluctantly peeled ourselves out of bed. Maria had already left for a food tour (working even while on holiday!) so the two of us decided to go shopping. We began with a lovely brunch at a cool little indie cafe, with book cases and mismatched chairs, that thought menus were too mainstream, and so when we asked what there was to eat we were told “something German you won’t know, croissant, or eggs and bread” (which we discovered were not just “eggs and bread” mind you, but an entire platter including fruit and cold meats!) Our shopping trip was short lived as we discovered the hard way that shops are closed in Europe on a Sunday. After idly walking up and down the street for a while we decided that drinking would be a better way to pass the time. Maria returned from her tour in time for the Italy vs Spain Euro Cup clash and we spent a quiet night of Japanese food, and some low key drinks with Marie and Mila, recovering from the night before.

The next day we thought, after two days of seeing nothing, we’d better play tourist and visit some of the sites. We went to the Jewish Museum, had our passports stamped at the famous east-west border crossing Checkpoint Charlie, walked through the Holocaust Memorial and checked out Brandenburg Gate.

That night after a quick dinner we did an alternative pub crawl (thanks for the tip Mel!). At a bargain 10 euros including 6 shots, we started off at Yesterday bar, with the most random decor ever, ranging from Jimi Hendrix posters to manequins and pinball machines.

After a drink and hearing the rules for the night (rule #1 ‘don’t be an arsehole’!), we were taken to a goth bar that played Fall Out Boy (hardly goth), then to a ping-pong bar to play around the world table tennis; next was an absinthe bar where we tried their “best one” for about $7 AUD; then we headed for a snack (and 2 more shots) at a takeaway kebab shop, before finishing the night at a nightclub, where the 90′s hits, including Britney Spears and the Backstreet Boys, had us going for the rest of the night. We headed home at about 5am, with a pizza pit-stop on the way to wrap up another great night!

On our last day in Berlin, we checked out some of the boutiques near our hotel, then made our way to the longest part of the Berlin wall that still stands, the East Side Gallery.

The 1.3km stretch of wall was commissioned and painted in sections by various European artists who gave their take on the significance of the wall and the way the world changed when it came down. We stumbled on a beach bar (sand and all) and had an afternoon drink by the river.

For our last dinner, we visited Kreuzberg, what is apparently (and we agree), the coolest part of the city. We had a great Turkish meal and met our German friends for a goodbye drink at a cool little jazz bar.

The morning before our flight, we went to the official Berlin Wall Memorial Park, where the first section of the wall was erected in 1961. The memorial is dedicated to those who died trying to escape East Germany. A farewell brunch with Maria before she went back to Rome (at our local of course!) and off we went to our next city.

This blog in no way captures the essence or vibe of Berlin because photos and words really can’t do it justice. You just need to see it for yourself. It is, in a word, cool. No other way to put it really.

It has the vibrancy of Melbourne (think Brunswick or Fitzroy), but on steroids, and despite its history (long and dark on a number of levels), it is very much a modern, cosmopolitan city.

And so we have left Berlin with, let’s face it, a bit of a crush now actually.