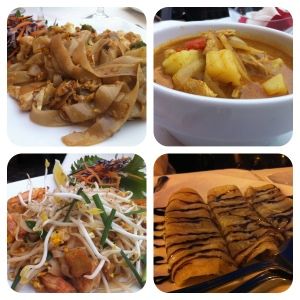 I hail from Melbourne. Arguably one of the most multicultural cities in the world. It’s where ‘spoilt for choice’ in the diverse food department takes on new meaning.

Ethnic food is obviously not the mainstream in Rome or anywhere in Italy for that matter.

But in my opinion, it has come a long way in the past decade or so.

I remember the first years I spent travelling in Italy, say in the late 1990s, Chinese would have been about the only non-Italian restaurant you would stumble across.

Italy has of course moved with the times (at least in this area) and especially in all major cities you will now find a decent (I won’t say overwhelming) number of ethnic restaurants. In Rome, it’s just enough to tide me over whenever I need!

It’s still strange for me to hear some people round here say that they have never tried sushi, a pad thai or a curry. (Or worse, that it will ‘probably make you sick’). Granted in small Italian towns, the concept of eating a delicacy such as raw fish is still (outrageously) a foreign concept, but to hear young Italians shy away from trying something new still blows me away.

Of course for every person who refuses to entertain the idea, there are those Italians who are extremely open-minded, have perhaps lived abroad or just generally willing to try new things.

But given those who are not, it’s clear that ethnic kitchens have to cater to the masses.

Strangely enough, this means that you can still order Roman plates at my local Thai restaurant and French fries and pasta when dining Chinese!

Last night I ate with friends for the first time (in Rome) at a Greek restaurant. The traditional mezze platter with dips and dolmades came out, not with Greek pide, but with crusty Italian bread. There was no lamb on the menu. Nor any seafood. And while I’m not averse to paying top dollar for good food, I thought €30 per head – for a shared entree, main meal (one of which was a small pie), one alcoholic beverage each and a dessert shared between 3, was a little pricey – by Roman standards.

I still actually recommend this place because the food was tasty. But just like with many ethnic food choices (except for Chinese where my pan dried dumplings ravioli alla piastra and Peking duck anatra pechinese sets me back about €9!) you have to pay a little more, for not a lot more. I guess it’s a general supply / demand thing!

So those of us who have been spoilt abroad with ethnic food or fusion dining, often lament the authenticity of a Roman made curry or naan.

Even though it’s good.. it’s enjoyable..it just misses that little something.

But then I remember that Italy
‘historically’ is not a migrant nation. It was not built on a foundation of multiple cultures. Italian is the one dominant culture in Italy.

So just like travelling Italians get frustrated because they can’t get a good coffee in Paris or an authentic pizza in Bangkok, so must we who have been internationally culinary spoilt simply accept the fact that ethnic food in Italy is always going to be… Well I guess, a little… Italy!

Therefore while Rome might not be able to compete with the ethnic melting pots of London, Melbourne, New York and Berlin, I’d like to say that all things considered, for me, it packs a pretty good punch!

So when I’m not in the mood for pizza and pasta, here’s where I go (and yes, they are slightly Trastevere-centric!):

Signing off from Rome,