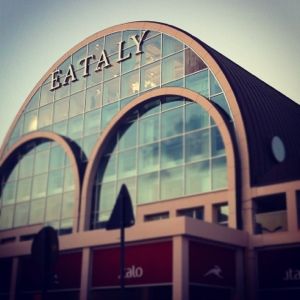 I just about died and went to food heaven tonight.

To this end, the opening of Eataly in Ostiense’s old air terminal has endured its fair share of critics.

I’m not one of them. Quite the opposite in fact, because after visiting tonight for the first time, you could say I’m one of their number one fans.

Brainchild of Italian businessman Oscar Farinetti, Eataly first opened its doors as a high end food store in a converted vermouth factory in Turin in 2007. The next opened in New York and Rome is the latest installment.

Eataly is more than a gourmet food outlet. It prides itself as a venue where you can buy food, eat food and learn food.

You name it, you can buy it at Eataly. From fresh fruit and vegetables to homemade pasta. Spices and condiments to cheeses and salumi. Fresh meat, poultry and meat. Chocolate, nougat and coffee to sweets and gelato. I could continue.

Add to that a huge range of kitchen apparatus, an extensive cook book area, interactive displays such as an olive oil tree, tv screens and the Lazio regional food wheel outlining which foods are in season when and Eataly has every single culinary aspect covered!

Products are of a high quality but personally I didn’t find prices to be overly exorbitant. Granted, the average Roman family with three kids probably won’t head to Eataly for their weekly shop. But there is a market for gourmet and high end produce in this city. And Eataly more than hits the mark.

Food education in the form of demonstrations and courses are also offered, but I’m not sure exactly how this component works.

In any case, visit their site www.roma.eataly.it and if you’re visiting or living in Rome, I suggest you check it out ASAP!

The only frustrating thing tonight was battling the crowds. There were long delays at all the food stands, some teething problems at the registers and in the end we had to content ourselves with a panino (mine with pesto Genovese and mozzarella di bufala) – which was great, but I would like to try the mozzarella bar or the fritti (fried) bar because the calamari and school prawns looked great.

My tip is to probably head down in the morning or early afternoon. Or wait a little until the opening hype dies down.

Most importantly, my other tip is to have the most divine gelato from the Venchi chocolate stand. Chocolate Orange and Unico Caramel are my pics.

Anything that promotes quality food, food education and business is a great thing and in my opinion, Eataly makes Rome just that little richer.

For me and Eataly it was love at first sight.