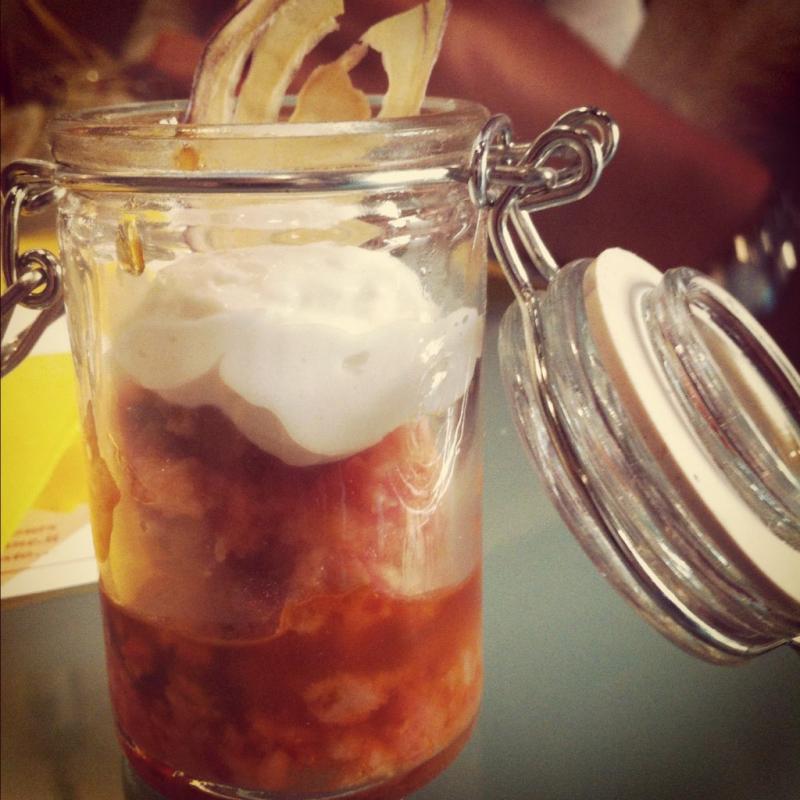 Last weekend I had the absolute pleasure of participating in an exclusive food event organised by Roman based bloggers and foodies Tavole Romane and finally ate at the famed and Michelin star rated restaurant Glass Hostaria.

Putting it simply I had an amazing food day. And the pictures emulate just that.

Could I be any happier??

Actually it was an amazing Rome day, because unlike most things I do, it wasn’t all completely about food. And after being herded like a cow on a lovely TreniItalia service from Napoli Centrale to Roma Termini yesterday (think 39 degrees, standing the whole way and sweat… a lot of sweat) – it’s these amazing Rome days that make living here worth it.

Finding my feet and working in the food tourism industry has awarded me some memorable experiences in Rome and introduced me to some wonderful people. I first came across Tavole Romane in the twitterverse and blog world. While they write an anonymous restaurant review blog (anonymity is the key to finding fantastic vs good food in any city!) and run food tours, this event was the first of its kind for them. I hope not the last.

Honesty speaking, I booked into the event, entitled Metti un sabato mattina con Raffaello e Cristina Bowerman (Set aside a Saturday for Raphael and Cristina Bowerman – the Italian lawyer turned chef and creator of Glass) purely because of the lunch. Having lived in Trastevere for almost a year, I had never dined at the restaurant (which is in my street!) and thought this was the perfect opportunity to sample.

Our group met at Villa Farnesina, a Renaissance suburban villa located in Via della Lungara in Trastevere. I knew the tour was to be completely in Italian but I was surprised to note that all participants were local. And to that end, in welcoming everyone to the event, the guide underscored the importance of local pride in Italy’s history, art and culture. She said that Rome is full of tesori pazzeschi (amazing treasures) that Romans should be proud of – after all this city is not just for tourists.

She continued to say that foreigners come to this city and create memories of a lifetime just tasting an Italian cappuccino or a suppli (Roman rice ball) – the things Romans take for granted. They are therefore things to be appreciated and to be proud of. This in effect, was the purpose of the event I believe. To engender or perhaps reignite a sense of pride in locals of all things Roman or Italian.

And so our tour continued through this beautiful palace resplendent with frescoes of Raphael. For me it was most interesting to note in years gone by, the Villa was considered to be outside the city, for Trastevere was always considered and outside quarter. For many years it was spoken of as Rome and Trastevere. Nowadays, this most beautiful and characteristic area forms part of the historical centre of the city.

The Villa was owned by the Farnese family from 1577 (hence the name) and around this time, Michaelangelo proposed a private bridge to link it with Palazzo Farnese on the other side of the river, which was never realised. It later belonged to the Boubons of Naples and in the 19th century by the Spanish Ambassador. Today, owned by the Italian Government, it accommodates the Roman academy of sciences.

If you’re in the area, I definitely recommend a walk through the Villa (especially the ground floor to see the beautiful Raphael frescoes).

But now to the most important part of the day – Glass.

Our lunch was like an informal tasting session. Two tasting stations were set up on either side of the restaurant and after we were promptly tended to with local wines, the amazing morsels of food started being served. Oh and the venue is chic and class all the way!

Here’s what we ate (and believe me the photos don’t do it justice!):

Of course the highlight for me!

Wines were perfectly matched and supplied by Paolo e Noemia d’Amico and Tre Botti. Representatives of the winemakers were on hand to give a brief presentation of their wines which was also interesting.

Needless to say, the food was just spectacular – to look at and to eat. It’s not hard to see why Glass has developed such fame and reputation.

This tasting day has given me the impetus to finally make a booking and enjoy the full Glass menu. And no doubt you’ll hear about it here soon.

A villa, some frescoes and delicious food and wine – a day in the eternal city that I will never forget.

Signing off from Rome