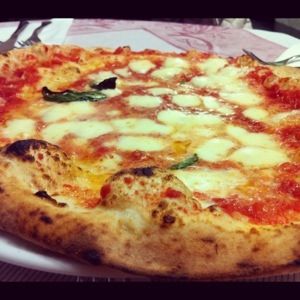 Most people were surprised to hear that given my love of travel and of Italy I’d never been to Naples.

Well I have stopped at the port and station countless times en route to Sorrento, the Amalfi Coast, Ischia and Capri, but never stayed on to see the actual city.

So when friends (and one who is actually Neapolitan) invited me to go this weekend, I jumped at the opportunity.

And life will never be the same.

You’ve surely heard the saying, “See Naples and die”. Well it rings too true for me now.

Life is complete once you’ve experienced Napoli (I say experienced and not ‘seen’ or ‘visited’ because in effect, you ‘experience’ Naples).

To say the least, it is unique.

Italy’s 3rd biggest city (after Rome and Milan) that sits at the foot of the imposing Vesuvius, is a city of contrasts.

More so, it is a city of ironies. It is beautiful, classy and cultured yet ugly, dirty and corrupt. That’s Naples.

I often describe Rome like this too. Italy also. Well Naples is an extension and reflection of this. In a sense, it embodies all that Italy represents. On so many levels.

An organised beautiful mess if you like. Where nothing works, yet everything works.

This is the city where pizza they say was born.

Home of the babà, the sfogliatella, pastiera, limoncello and more.

It’s where the crystal blue waters of the Gulf of Naples dazzle you as you go by the lungomare.

A city where after a while the sound of a motorino zipping by just fades into background sound.

Where the city centre is that beautiful and signifies such historical importance that it is now a UNESCO heritage site.

A city that is steeped in tradition, with Neapolitan being spoken on the streets, in the shops and at restaurants as though it were the national language.

Here the traffic on the weekend (and most of the time really!) is blocked – no, I mean at a complete standstill in streets and in tunnels – until passed 2am.

A city where you can park your car any way you like just about anywhere you like. Double parking it would seem is a sport!

Here the hustle and bustle and overwhelming noise comes to a screeching halt with the drop of shop shutters and complete silence for a passing funeral procession. The people of Napoli know respect. And religious or not, this is something to note and is indicative of the spirit of its people.

This is a city where pirate copies and imitation-anything is an art.

Where you are made to feel so warm and welcome one minute yet feel you’ll be ripped off the next. The Neapolitans have long had a reputation for being furbi – shifty… or as they might have you believe, street smart! 🙂

Soccer is the real religion here. While many cities have more than one team and so evolve great intra-city rivalries, there’s only one team in this town. The only rival here is every other single team in the league. The city is dripping in Napoli team memorabilia. A highlight – toilet paper with logos of other teams in the Serie A. This is what Neapolitans say they love wiping their ar$&s with!

And I absolutely love it.

The other highlight for me of course, was the food. In fact about all we did was eat from the moment I arrived.

The pizza put simply, is pure magnificence. Different to Roman pizza in taste, texture and thinness, it’s heavenly to eat.

We ate at Di Matteo (locally and famously known now as Dal Presidente after Bill Clinton visited) and the classic margherita, fritti (delectable rice balls, potato croquettes and fried balls of pasta) and pizza fritta (fried pizza stuffed with ricotta and prosciutto) were worth every second of the 1 hour 20 minutes we waited just for a table.

Neapolitans take their pizza just about as seriously as their soccer. I knew that the long line of locals out front was a good sign.

I tried the Neapolitan sfogliatella – delicate sweet pastry filled with ricotta and candied orange and spice – at Pintauro (the pastry shop where it originated a few years back in 1785).

Then there is the babà. This historic and traditional rum soaked pastry is never going to be my dessert of choice but the ones I tried were pretty good.

The torrone on the other hand, was to die for. Soft and almost praline like, I tried the hazelnut, dark chocolate and pistachio versions.

Being one of Italy’s largest port cities, tasting the delectable seafood was non negotiable. Dining at Al Faretto in Marechiaro (a pretty seaside district made famous in the past as the set for many movies) I ate the most phenomenal tuna tartare and paccheri (short tube type pasta) with Ricciola (amberjack fish) (oh and just casually bumped into an Italian TV celebrity, Sergio Assisi. Yes I watch Italian TV. There I said it!)

I was also treated to a home cooked family lunch where we feasted on eggplant parmigiana and the divine mozzarella di bufala. Being welcomed into the Neapolitan family fold was heartwarming (and delicious!)

For my last meal in Naples we headed out of the city to Pizzeria Malafronte in Gragnano (30km away and known for some of Italy’s best artisanal dried pasta) to sample the famous Panuozzo – basically a huge loaf of bread filled with pizza type ingredients and then toasted in a wood fire oven. We tried the pancetta and mushroom and pork sausage and broccoletti. Just delicious!

But the highlight of this particular meal was watching the Neapolitans’ reaction to a soccer match between Juventus and Inter Milan. I Napoletani fiercely hate northern Turin team Juve and when they lost this match, the restaurant crowd just exploded! Cheers, hugging and a loud roar. I can only imagine their reaction to their own team wins!

What more is there to say really?

It’s gutsy, has grit but above-all, it is excessively passionate and has real heart.

Napoli and I have a lot of lost time to catch up on, so I know I’ll be back again in no time.

Signing off from Trastevere
(preparing to hunger strike this week)
Baci, Maria