Alberto Sordi and our beloved Rome 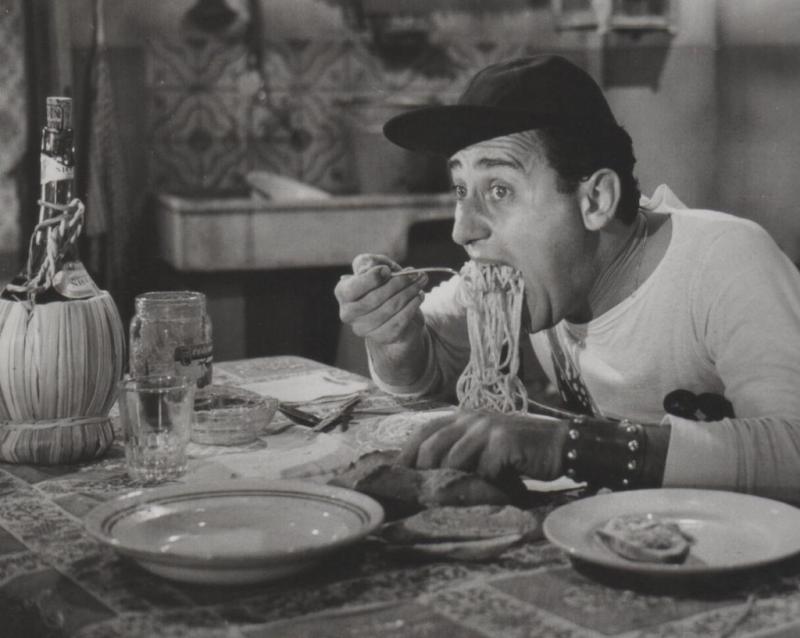 It’s hard to explain what Alberto Sordi means to Rome and the Romans.

He had a coveted film career that spanned 7 decades but he represented to Rome, Italy and the world much much more than that.

He was an icon.

If you’ve ever been to Rome or you live here you will have seen the famous image of him eating spaghetti in the 1954 Un Americano a Roma (An American in Rome) on the wall of just about any Roman trattoria.

So loved by the city of Rome, they made him honorary mayor for a day to celebrate his eightieth birthday!

In 2003 Sordi died shortly before his eighty-third birthday following a heart attack.

Many say that his death unleashed a wave of emotion not seen in Italy for years.

Before the funeral, tens of thousands queued to file silently past his open coffin as he lay in state in Rome’s town hall (Campidoglio) – an honor bestowed only until then to Roman Emperors!

A crowd in excess of 250,000 people gathered to pay their last respects at his funeral by the Basilica of San Giovanni. To this day it remains the largest funeral ever attended in Rome – second only to that of Pope John Paul II who died two years later.

Millions more followed the ceremony as it was broadcast live on national TV. In his oration, Cardinal Camillo Ruini said, “When a loved one dies, a mass of memories and emotions crowd the minds of those who stay behind. Alberto Sordi has died, this has happened to an entire city, an entire country.”

The crowd outside clapped as he spoke, while overhead a small plane flew over San Giovanni with a banner: “This time you’ve made us cry.”

Chants of ‘Alberto’ and ‘Albertone’ echoed through the area as carabinieri (policemen) carried Sordi’s coffin out of the Basilica.

It was an unprecedented outpouring of public grief.

An indication of what this man meant to the city and it’s people.

To mark the 10 year anniversary of his death, a free exhibition, Alberto Sordi e la sua Roma (Alberto Sordi and his beloved Rome), was held at the Vittoriano (Monument to Vittorio Emanuele – otherwise known as the Wedding Cake in Piazza Venezia) and I attended to pay my respects to an icon of the city. A man born in my local neighbourhood (literally around the corner from my house) and who meant so many things to so many people.

I just love talking to Romans about Sordi. It evokes real joy, admiration and passion. He was just about loved by all. About as Roman as the Colosseum and the Tevere!

Sordi was and remains part of the beating heart of Rome.

Mainly photographic, the exhibition documented his phenomenal career that has cemented him in international cinematic history.

Rome loved Sordi and Sordi loved Rome. I leave you with my favourite image of the exhibition. His most famous quote about his (and my) beloved Roma.

Translation:
“Rome is the world’s lounge room, a city envied by the planet. And the Romans are an extraordinary people. Not just cynical, we are extremely generous, wise and patient. Traffic and all, people of Rome still know how to enjoy life. I love this city like crazy and enjoy rediscovering every day, even through my films. I have travelled the world over. But never have I seen a more beautiful place.”

I could not agree more.

Alberto Sordi will never be forgotten.