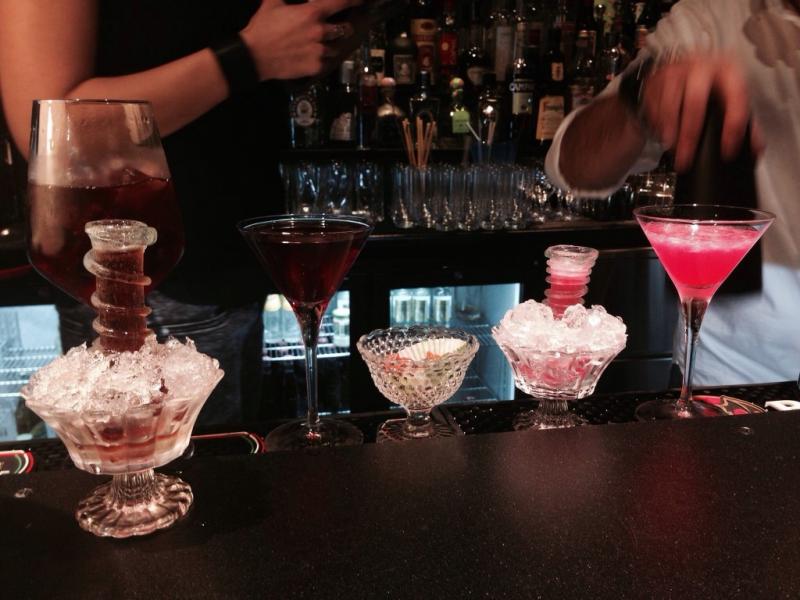 It’s a Thursday night – a school night – and when it was time to go home, I really didn’t want to leave. And now I’m sitting here planning when to go back!

Walking in, the first thing you see are some colourful bean bags that line the floor and a modern looking bar decked out in an uber-contemporary style. In fact you don’t really feel as though you’re in the gritty, historically working class communist neighborhood at all.

Massimo D’Addezio of the Sravinskij Bar fame (the bar at Rome’s five-star Hotel de Russie) opened Co.So late in 2013 and it’s fast developed a reputation for some of the most delicious and adventurous cocktails in the city.

Given my love for sugar, I opted for the sweetest cocktail on the menu – a bubblegum concoction of sorts and it came served with a small bowl of jelly bears! They also serve a top up for you on ice. Needless to say, I was on a smiley sugar high!

One of their most talked about cocktails is none other than a take on the roman classic – the Carbonara Sour made of pork cheek (guanciale) infused vodka, lemon juice, egg whites and ground black pepper. We tried this one too. Nice, but ‘sour’ generally is not my thing.

For a light snack we tried the burger with a handmade porchetta (seasoned roast pork) burger – deconstructed porchetta turned into an actual patty. And the pulled pork, apple and BBQ sauce sandwich. Both came served with corn chips and dipping sauces. Pork products are supplied by local purveyor of fine meats, Antica Norcineria Lattanzi and bread from a nearby organic bakery.

Only downfall – no dessert… Yet.

We were however, promptly brought some popcorn and a small bowl of peanut M&Ms. Representative of the playful nature of the venue.

On the dessert front, all was quickly forgiven when I was told that they are soon to have Pasticerria de Bellis on board as their exclusive sweets supplier. There’s currently much buzz about de Bellis, one of Rome’s premier pastry magicians and even though I’m actually yet to try, I have been dying to. So watch this space.

But in the meantime, if you’re in Rome, get down to Co.So ASAP. And just thank me later.