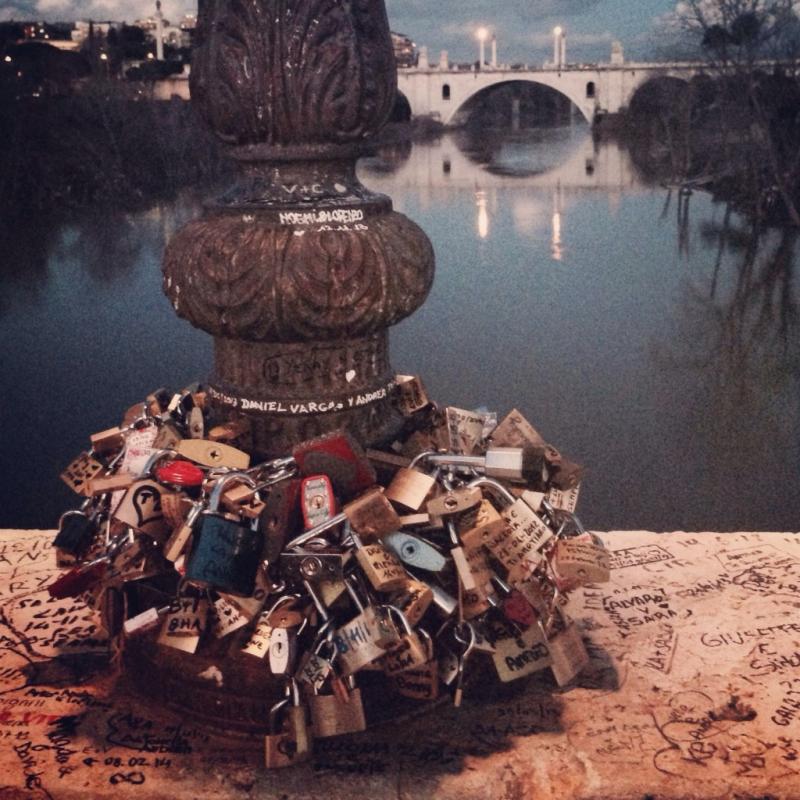 This weekend I spent twilight and an evening in an area of Rome I’m not all that familiar with. Ponte Milvio, just north of the city centre is right by the Stadio Olimpico (stadium where mostly soccer is played) and is quite the affluent little cul de sac . The area sits on the banks of the Tiber River and its centrepiece is the bridge Ponte Milvio (hence the name!), widely known around here as the Ponte dei Luccheti (padlocks of love). Basically lovers write their initials on padlocks, chain them to the lampposts along the bridge and throw the key into the Tiber to render their love eternal. The trend was inspired by a 2006 Italian teen love novel and soon spread to Paris and other cities.

While in 2012 the City of Rome had the majority removed claiming damage to the bridge from the weight of all the locks, some still remain and it’s a pretty romantic sight to see.

Beyond seeing the love bridge for the first time, I discovered two food gems that blew my mind.

The first was friggitoria,I Fritti di Sora Milvia. Fritti means fried food and generally in Rome refers to street food or a pre-pizza snack. There is no equivalent for friggitoria in English – it basically means a fried food outlet. This take away hole in the wall gets super busy and on a Saturday night the queue can be out the door. But believe me, it’s worth it. I tried the cacio e pepe supplì (supplì is a fried rice ball and cacio e pepe is the roman classic simple but divine pasta sauce of pecorino cheese and pepper) and polpette di bollito – basically a crumbed patty of braised beef. To die for. But my favourite was the crochette burin – a potato, tomato and crispy guanciale (pork cheek) croquette. Oh. My. God.

And if that wasn’t enough, friends then exposed me to a dessert eaten and gifted in Rome especially on International Women’s Day, la mimosa, which I had never tasted. We tried it at the Pasticerria Mondi which is apparently some Rome cake shop institution I didn’t know about! Nor the mimosa for that matter. I have some serious lost time to make up for.

This cake is amazing. Modelled on the mimosa flower, it’s golden yellow in colour and features the most delicate of sponge layered with fresh cream.

Also to note, Trapizzino has just opened an outpost of its 00100 pizzeria (in Testaccio) here. Brainchild of one of Rome’s best and most innovative pizza makers, Stefano Callegari, the trapizzino is a cross between a tramezzino and pizza slice – a pizza pocket if you like. Filled with things like meatballs in tomato sauce or roman tripe for the more adventurous, my absolute favourite is the pollo alla cacciatore – chicken stewed with herbs.

For a trattoria with all your roman classics, try Da Pallotta and Voy is another bar and restaurant popular with locals. There’s just a whole other heap of wine bars and restaurants all with walking distance from the bridge and on or just off the main square Piazzale Ponte Milvio.

All in all, a little foodie hub and needless to say, I’ll be trekking north to Ponte Milvio again quite soon.