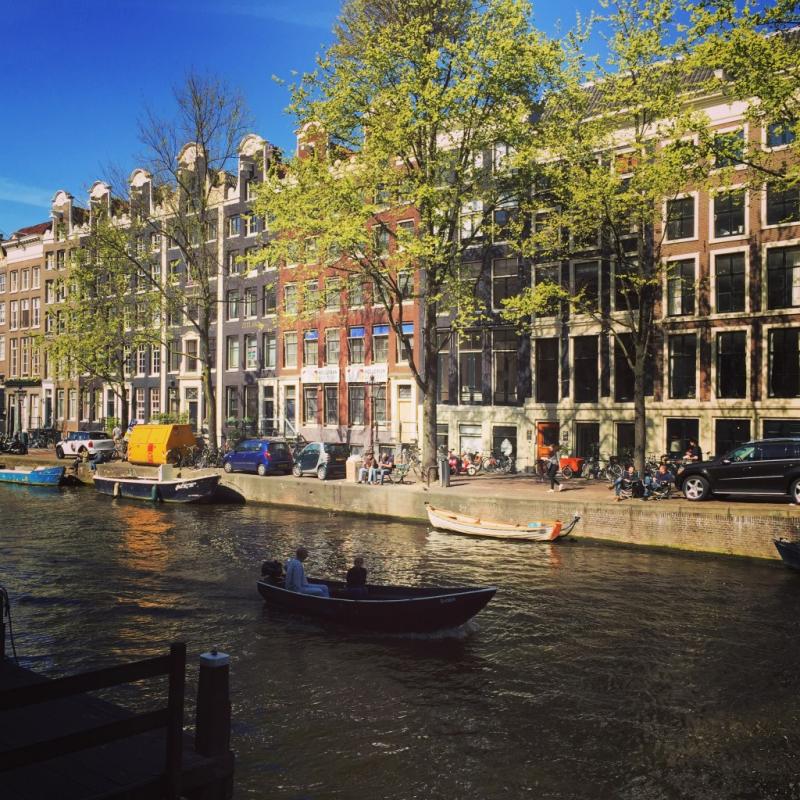 Amsterdam is just so darn pretty.
I mean my eyes started to hurt after a while from all the… Pretty!

The heritage protected canal belt area is just gorgeous and so on a sunny spring morning (with Amsterdam being a little bit of a show-off for me!) I met my food tour guide (colleague and friend), Annamaria of Eating Amsterdam tours for a foodie walk through the Jordaan neighbourhood.

Here’s what I learnt:

This once radical working-class neighborhood turned gentrified cool concentration of galleries, speciality shops, cafes, restaurants and boutiques is still like its own little village. Historically the Jordaan had its own music and the locals, their own sense of humour. Set amongst Amsterdam’s stunning canals, it’s the perfect place to walk around and get lost in.

2) People have been eating apple pie in Amsterdam since the 15th century!

I ate this delicious one in a classic brown cafe called Papeneiland (in business only for 400 years).

3) Herring was one of the first products that was traded on the canals of Amsterdam!

So you could say they’ve been eating the stuff for a long time. Together with golden fried salt cod, we tried some of Amsterdam’s most delicious and Annamaria showed us just how!

4) Owning a house on the canal belt is out of my league!

I came to this realisation as we sailed on a 106 years old boat (one that Winston Churchill had sailed on to celebrate the liberation of Amsterdam a short while ago!). Unless you have a lazy €8-25M in your pocket, it’s probably out of your league too!

Oh and for information, there are approximately 165 canals in Amsterdam. Our smooth talking captain Tony, told us so.

We stopped for the most delicious sandwich and deep fried plantain with peanut sauce at Swieti Sranang. This toko or small eatery has some or Amsterdam’s best Surinamese / Indonesian food and chef Juliet (Indonesian born, Surinamese raised!) makes all the treats herself!

6) Not all liquorice is equal.
Unlike me, the Dutch love their liquorice and apparently the saltier the better. Walking into Mariska’s shop, Het Oud-Hollandsch Snoepwinkeltje (I’ll let you try to pronounce that!) is like walking into sweet lolly heaven!

7) My sweet tooth and poffertjes are a match made in heaven.

We tried these traditional Dutch mini pancakes at Café de Prins served with butter, icing sugar and maple syrup. I was in syrupy sugar heaven!

8) (Like many of you, I’m sure) I’ve been pronouncing Gouda wrong my entire life!
You’ll have to ask a Dutch speaker to correct you on you this one. We tried some gouda varieties with some sparking and I can safely say that eating cheese – unless it’s cruising along the canals of Amsterdam on a private boat – will never be the same again.

These bite sized fried treats are an anytime of day beer (or any alcohol, but especially beer) snack for the Dutch. Think small meatball type croquettes. We picked up some of the cities best drive-thru style on our canal ride. As you do.

De Pijp is another Amsterdam neighborhood which I got a taste of.. Literally! Eating Amsterdam has just launched a twilight evening food stroll in this ‘hood and given I was in town, I was forced to go and sample some potential tastings! This district has a lively market area, unique boutiques, cool bars and multicultural vibe.

I for one, can’t wait – not that I needed another reason to go back!

And having local foodie friends like Amsterdam Foodie – the premier source and font of food knowledge for all things Amsterdam – also kind of came in handy! This had me sampling Rijsttafel (I can spell it but don’t ask me to pronounce it!) which translates literally to ‘rice table’ and is a blanket term for an Indonesian banquet style meal. Apparently even 40 types of dishes can feature in a sitting. We didn’t have anywhere near that number with ours at Tempo Doeloe, but here’s a sample of what we munched on (and which I totally loved, except for some of the extra spicy which I thought might blow my head off and which I learnt early in the piece I should steer clear from!)

Signing off from Trastevere (daydreaming about all the pretty really… And poffertjes!)