La Fraschetta di Castel Sant’Angelo: in the Heart of Rome 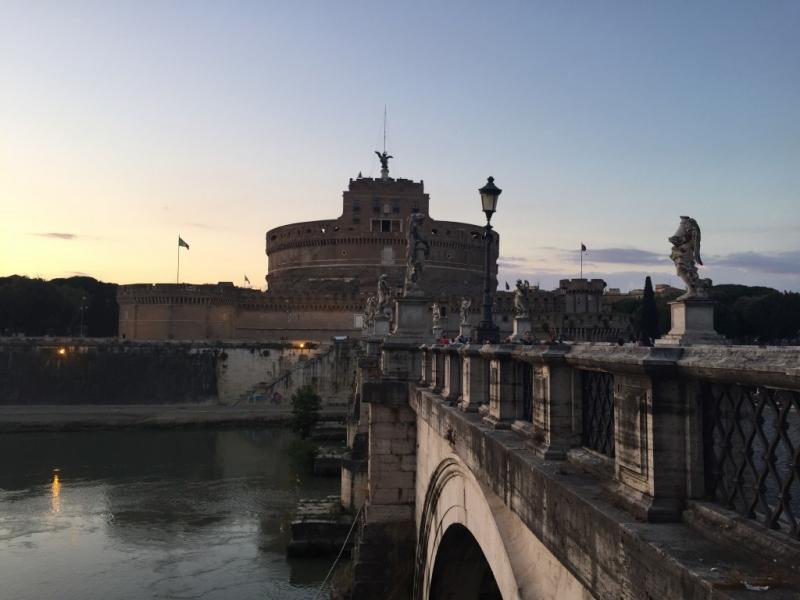 Going to a fraschetta-type restaurant in Rome is always entertaining.

Going to a fraschetta in Rome on the night that Roma wins the derby (against Lazio). Well that’s another story!

A fraschetta is the name given to the casual style places historically found in the Castelli Romani (the Roman countryside where towns like Frascati, Albano, Ariccia and Grottaferrata sit) and where you’d go to eat porchetta and drink wine in tumblers on wooden tables that are covered with brown paper. It’s where the staff treat you like family and randomly break into song.

La Fraschetta di Castel Sant’Angelo brings you all of this but in the very heart of Rome. As the name suggests, it’s literally located in the shadow of Castel Sant’Angelo (in my opinion, one of the most underrated tourist attractions in the eternal city) and it’s family-run, Roman fraschetta spirit at its best.

The owners and staff will treat you as friends from the moment you arrive. And they’ll remember you alright. Because once you’ve eaten here once and left a hand-written message on the wall, you’re family. Simple as that.

This is what I love about Romans. Don’t get me wrong, it’s not that the north is stuffy. They just have a different manner. Romans on the other hand, take you quickly into the fold. The Italian polite form is used less and less in these parts. Romans ask you about your life, your business. Not because they’re nosy. But because that’s just how they are. They’re your friend as soon as you meet.

And so tonight, I went back to eat with my friends at La Fraschetta di Castel Sant’Angelo. I have now eaten here three times, and the staff – well, they’re my friends too. That’s Rome.

But tonight wasn’t just any night. The Roma-Lazio derby had been moved to 6pm in the hope that this would help to avoid the usual rivalry-induced violence. Just before 8pm the score was locked at 1-1. Then before you knew it, I heard a roar – from my balcony. Roma had scored. I quickly headed off to dinner, knowing full well that once the crowd moved on from the Stadio Olimpico, city traffic (especially along the river) would be at a standstill.

I got to the restaurant on time and nothing could’ve have prepared me for the scenes. There were fans who had watched the match on TV screens and some who had walked down from the stadium. Roma guernseys, Lazio merda (Lazio is shit) ones, scarves, flags and more. People standing on chairs, tables; chanting, singing, crying, laughing and celebrating.

The atmosphere was just electric.

Oh and the food.

We had tagliere (boards) of porchetta, salumi, cinghiale (wild boar) with fennel, burrata.. bruschetta with fine slices of lardo (lard) and marinated artichokes. Then out came the pasta – served hot and in pans straight to the table. The classics: carbonara and amatriciana. Then tripe and flame grilled lamb.

Desserts are a must too. Tiramisu in a jar, chocolate salami – a decadent choc-biscuit slice and choc-orange cheesecake. Washed down with house wine of course and all served with a smile, a song and without much grace. No frills, but with heart -real heart. That’s Rome!

After dinner as I stood on the sidewalk outside the restaurant, I could see the illuminated Castel Sant’Angelo in the distance.. I could hear the horns of a Roma victory beeping along the Lungotevere and the ringing of roman folk songs in my ear. I take a sip of my sweet digestif and think: God I love this city. Perhaps some love affairs do last forever.