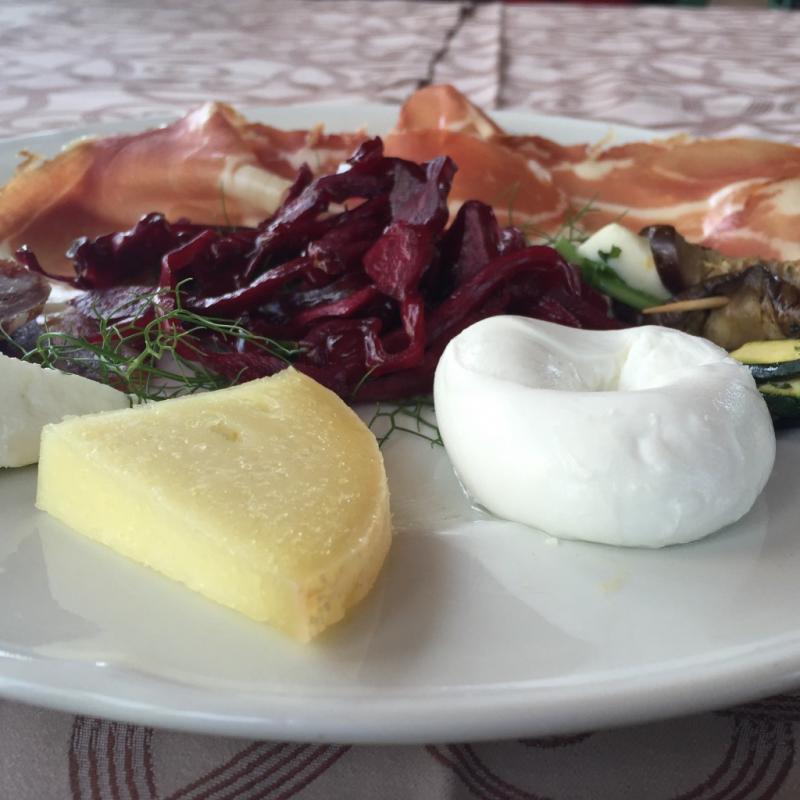 When I was recently invited to visit Lazio’s Ciociaria region, everyone I mentioned it to in Rome said one and the same thing: You’re going to love the food.

This area is located in the region’s south-east, around an hours drive from Rome in the province of Frosinone. Featuring quaint towns, medieval villages, sprawling green hills, the borders of Ciociaria are still up for discussion by the locals.

One thing unites them though, and that’s pride in their produce and food.

The food in these parts is not about refined, delicate sauces, fusion or elegance (although some new age chefs are really starting to strut their stuff). It’s hearty and simple poor food (cucina povera) at its best. It’s about honouring and maintaining ancient traditions and making do with what you’ve got!

Completely landlocked, beans and legumes play a big role in the Ciociarian diet, as does meat and poultry. No fish around here! And this is Cesanese wine heartland. There are two varieties of this soft and light bodied red wine, produced in Ciociaria, one of which – Cesanese del Piglio – is the only DOCG certified wine in all of Lazio! This means that it is quality controlled and guaranteed to have been produced only in 5 towns (Piglio, Serrone, Anagni, Fiuggi and Acuto) and according to a strict set of guidelines. The other, Cabernet di Atina (DOC) is produced in Val di Comino and often has some imported grapes in the mix.

For when you’ve had enough wine, the famous water from the natural springs of Fiuggi sits on tabletops everywhere!

So if you’re headed to the area and eating and drinking figure high on your to-do-list, here are some of the things you should look out for (season dependant):

Cheese and charcuterie
A huge variety of sheep’s and goat’s milk cheeses; both the fresh aged varieties. Marzolina is a delicious goat’s cheese traditionally produced in March and served grated over pasta or eaten with jams and chutneys. Morolo is another sheep’s milk cheese produced locally as are various types of sausages and salami.

Ciociaria is also truffle heartland. Seasonally you can find bianchetti (a small truffle found in springtime) and black truffle usually in the colder months. In the warmer months, and not far from mountainous Abruzzo, hunters search for Tartufo di Campoli Appennino – similar to the black truffle variety but less pungent. Mushrooms are also big on the menu with an abundance here for picking.

The people of Atina have been growing cannellini beans since the early 1800s. They are opaque white and tender and is the only bean that doesn’t need to be soaked before cooking. The most common way to eat them here is in the dish sagne e fagioli (a homemade short pasta that look like off-cuts, made with water, flour and salt).

This is cream based pasta sauce made with peas, mushroom and pork sausage or pancetta.

Lamb, chicken and pork either baked or flame grilled and served with seasonal vegetables. Like across Lazio and in the neighboring Abruzzo, porchetta is also on the menu in Ciociaria (and it’s damn good!). Sausages conserved in oil are also popular.

Olive harvesting has been taking place here for generations. They produce extra virgin olive oil in both the cold pressed more modern methods. Very often it’s served with a local bread that’s traditionally made with yeast, water, flour and salt.

Ciambelline al Vino (ring shaped, sugar coated biscuits made especially for dipping in red wine) and Sesemelli (biscuits made with hazelnut) are the most common of sweets. In the centre-south of Ciociaria, closer to Frosinone, La Pigna Pasquale is a traditional Easter cake with a white sugar glacé that takes around two days to prepare. Look out also for Amaretti di Guarcino, a soft, hazelnut macaron type biscuit and in Anagni and Fiuggi, they are known for their Pan Pepato at Christmas time which is a round sweet spin off from panforte, made with nuts and spices.

With rolling hills and vineyards as the backdrop you won’t want ever want to leave Casale Verde Luna! An extensive cellar of Cesanese wine labels and homestyle cooking that will have you rolling out. From porchetta to cheese and salami boards to homemade pasta and desserts, this is the perfect place for a long wine lunch!

In a town famous for its sausages, you can bank on eating well round here! Young chef Mario Quattrociocchi has won awards for his cooking and has presided over the Domus Hernica (built within the rocky walls of what remains of a 13th century palace) since 2010. Born in Frosinone he showcases the best of local produce with a modern take on this ancient cuisine from entrees like twice baked polenta served with local field mushrooms and marzolino and parmigiano reggiano fondue to pasta with local truffles to understated desserts like an open-faced bake pear tart.

This family run Giardini dell’Acropoli located right by the archeological site of the Arpino Acropolis or what was the fortified village of Civitavecchia. In a relaxed setting and an expansive garden area, feast on local cheeses and salumi, sagne con fagioli made with a slight variation in the warmer months; at this time of year they add asparagus which is in season because apparently it’s the way the famous Mastroianni family used to like it (think Marcello Mastroianni who was in Fellini’s La Dolce Vita).

Outside of Italy, on the culinary stage, Ciorcaria doesn’t have the reputation of say a Tuscany, Umbria or even Puglia, but believe you me, this is one of Italy’s best kept secrets. And at just an hour from Rome, it makes for a perfect foodie city break.

Signing of from Trastevere
Baci, Maria

While all my travel costs were covered, nobody tells me what to write. All views and images are my own