Where to try Japanese fusion dining in Rome 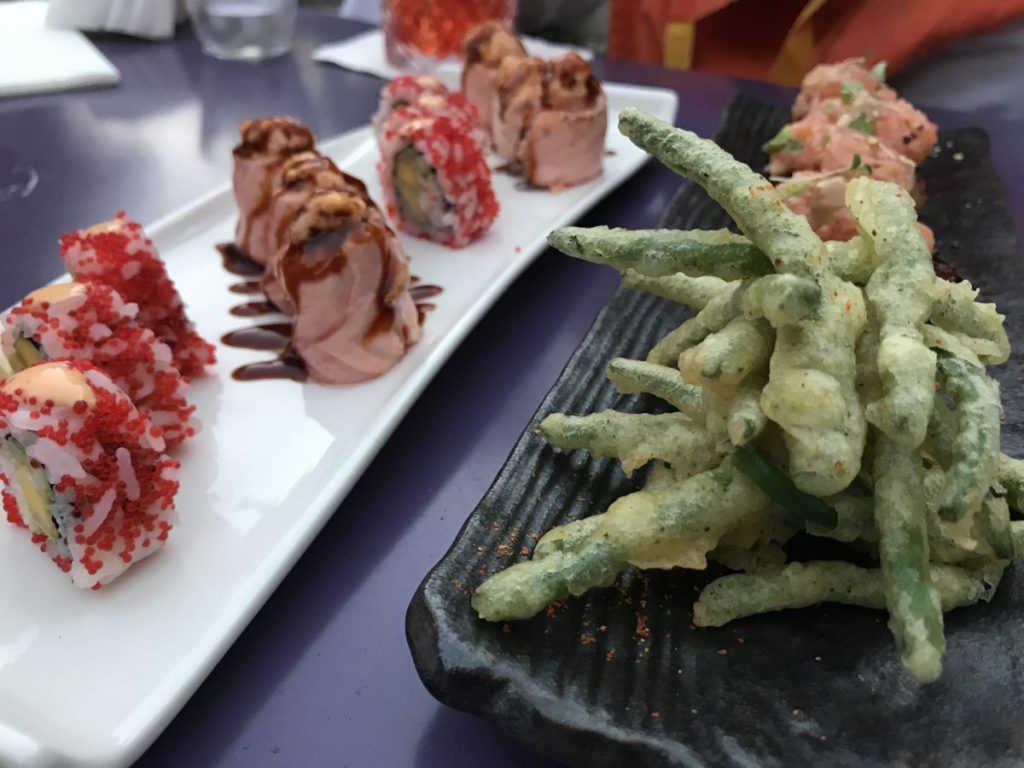 Cocktails, craft beer, ‘streetfood’ in all shapes and sizes, speakeasies, ramen and burgers – Rome has sure had its fair share of trends lately. Some great, others not so great. Another popular dining format is that of Japanese fusion. The city has seen Japanese / Brazilian chains Temakinho and SambaMaki and a whole host of spin offs over the last few years. If you’re not an informed Jap/Bra fan you’d be forgiven for thinking it’s a fad or a what-will-they-come-up-with-next-fusion. But it’s an actual bonafide genre born of the significant postwar migration of Japanese to Brazil.
The concept you see in restaurants in Italy is basically a mix of the Japanese repertoire you’re used to (sushi, sashimi) and exotic fruits common in Brazil, with cocktails and some samba music to match.
A couple of months ago, Fingers opened in Rome. It’s the brainchild of ex Brazilian soccer player Clarence Seedorf and Japanese chef Roberto Okabe. Their first restaurant is in Milan, they have another in the jet setting luxury Sardinian town of Porto Cervo and at Megève in the French alps.
As a native English speaker, I have to say – for the record – that I do have an issue with the name. ‘Fingers’ doesn’t resonate in any way with what you get when you walk in to or dine at this place and is a little silly. In fact I don’t think it does it justice at all, sounding more like a fast food or takeaway joint. Now that I got that off my chest, back to the venue. As their city list of other locations suggests, this is a venue targeting a high end clientele. The interiors say as much, as does the menu – more refined than your traditional Japanese place with creative flavour and texture mixing (think prawns wrapped in kataifi and tartares topped with Russian caviar). Last year it was Zuma that made headlines in town with its ritzy rooftop terrace and stylish take up of the top floors of the Fendi building. This remains my favourite for fine-dine Japanese. The quality and the selection is in my opinion insurmountable in Rome at the moment – but it does come at a high price. (Click here for my review about Zuma Rome). Another new kid on the block (about a year now) is Yugo, located within the boutique Luxus Hotel in Monti. With a menu designed by Michelin starred chef Anthony Genovese, this place brings together a fusion of Mediterranean and Asian flavours. I did find the staff rude the first time I went, but it had just opened and I went back to give them a chance. I was more impressed the second time and highly recommend their creative cocktails and their steamed buns are to die for. And one of the most exciting openings in a while, is Me Geisha. Now this place blew me away! I was invited for a very special preview by my lovely friend Elyssa (check out her awesome Rome resources and tips at Romewise) and I have to say it’s always cool being the first to dine in a new venue. As the name suggest, the Geisha theme is felt throughout with enormous black and white prints of them throughout. Walking into this place (back end of the grounds of Monteverde’s Momo Republic) can only be described as being enveloped in an enchanting green oasis. Low hanging lights, green foliage, and California beach inspired wooden furniture and fittings. Rodelio Aglibot was born in California, has spent much of life in Hawaii and has Philippine origins. This eclectic mix has inspired his cooking and this celebrity chef (with his now well-know international brand, The Food Buddha and a string of international projects) doesn’t disappoint. His crispy rice morsels with salmon tartare atop are incredible, as are most of the dishes really from the miso-marinated sea bass to the rolls and sashimi. So to recap, if you’re looking to give Japanese fusion dining in Rome a go, here’s where:
Temakinho Monti (Via dei Serpenti 16, website), also other locations
Sambamaki (Viale Regina Margherita 168, website), also other locations
Fingers (Via Francesco Carrara 14, website)
Yugo (Largo Angelicum 2, website)
Zuma (Via della Fontanella di Borghese 48, website)
Me Geisha (Piazza Carlo Forlanini 10, website)
You can also check out my broader list of where to eat Japanese in Rome.
Signing off from Trastevere,
Baci Maria
0