My list of restaurants to try in Rome keeps growing. I tick one or two off and then add another five! And with new openings all the time, it’s hard to keep up around here.

Ristorante All’Oro (Centro)
Located in the super stylish First Art Luxury Hotel right by Piazza del Popolo, I recently added All’Oro to my Michelin star repertoire. While the food was of course amazing, I loved dining here because the atmosphere wasn’t the stuffy and overly formal kind you’d expect of a restaurant of its calibre. We went the whole 4 courses (baccalà tiramisu – cod and potato purée topped with bitter cocoa; zucchini flower cannelloni; lamb cooked two ways with harissa; and a deconstructed mille-feuille). Be sure to have a pre or post dinner drink at the rooftop bar with a stunning view of the city. 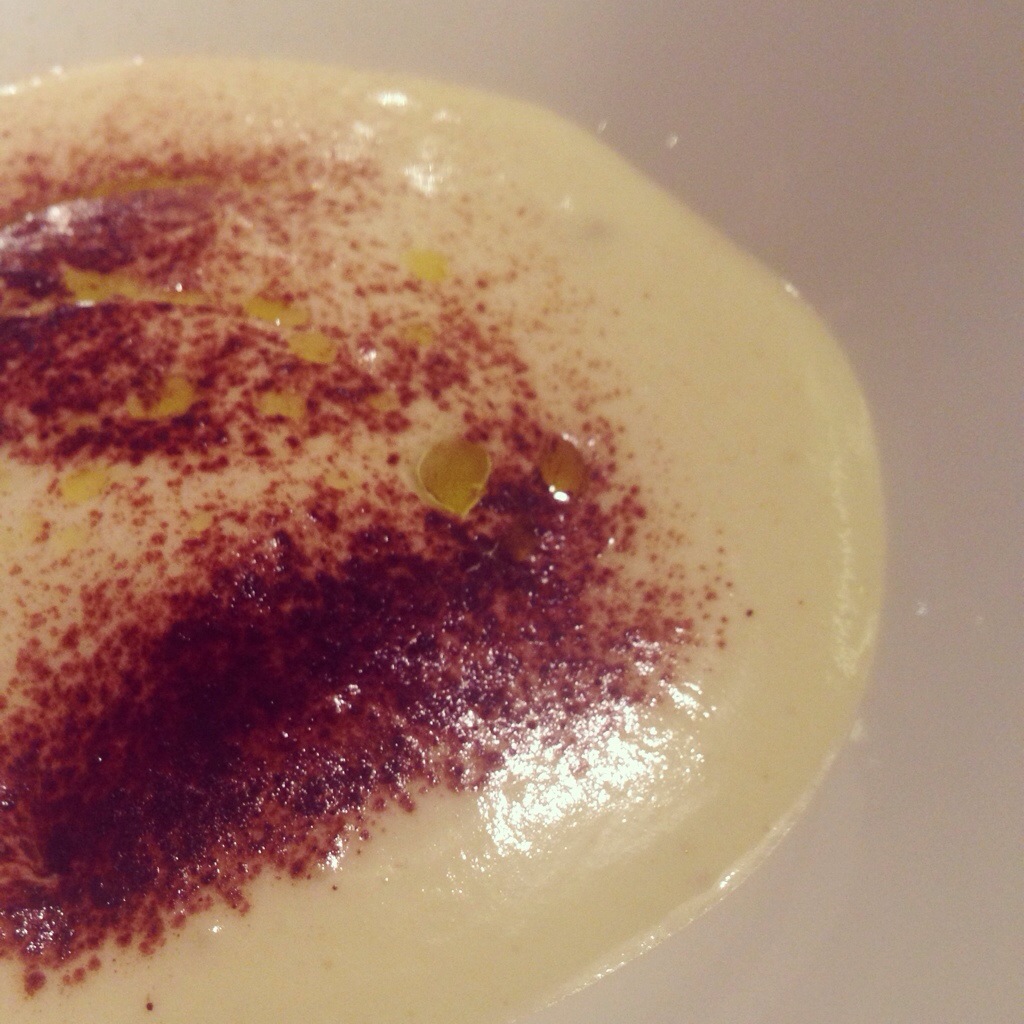 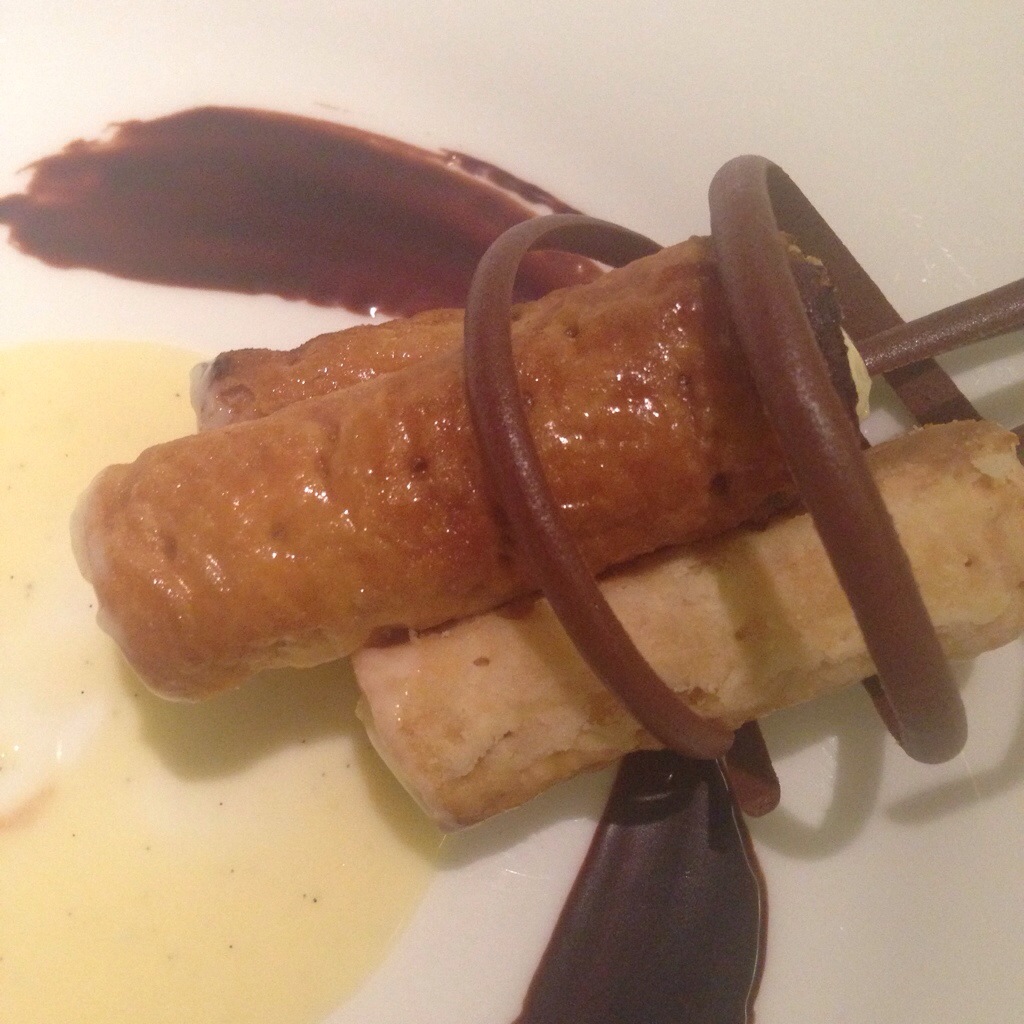 Ristoro degli Angeli (Garbatella)
I love love this place. Understated, carefully designed dishes with a modern take on roman cuisine this restaurant has been around for about 10 years and frequented, for the most part, by locals only. I tried the prawns wrapped in kataifi pastry, homemade egg fettuccine pan fried in butter with extra aged Parmesan and toasted sesame seeds and the mezze maniche (short tube style pasta) with broccoli and pecorino cheese. For dessert, baked apples with toasted hazelnuts and zabaglione (eggnog). 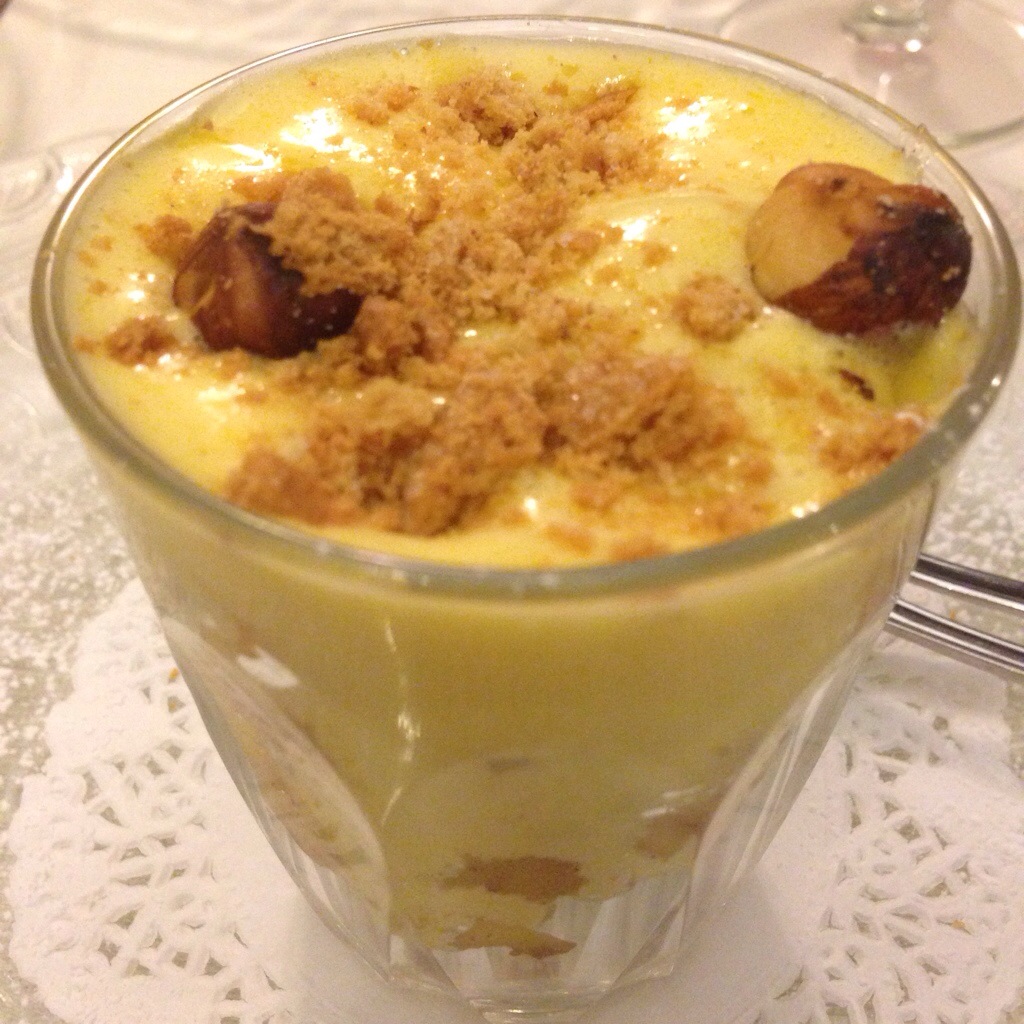 Duke’s (Parioli)
A good friend took me here for cocktails a few months back and the rest, as they say, is history. It was love at first cocktail! But I don’t keep returning to Duke’s in the upscale Parioli district just for my Passion Boheme (a vodka based passion fruit and cinnamon concoction). I keep going back for one of the best tuna tartare I’ve eaten and char grilled prime steak that’s also a winner. They open up a large garden area for the summer months which is simply stunning and I recently dined here on a delicious spaghetti and lobster. Oh and the staff are fantastically attentive. 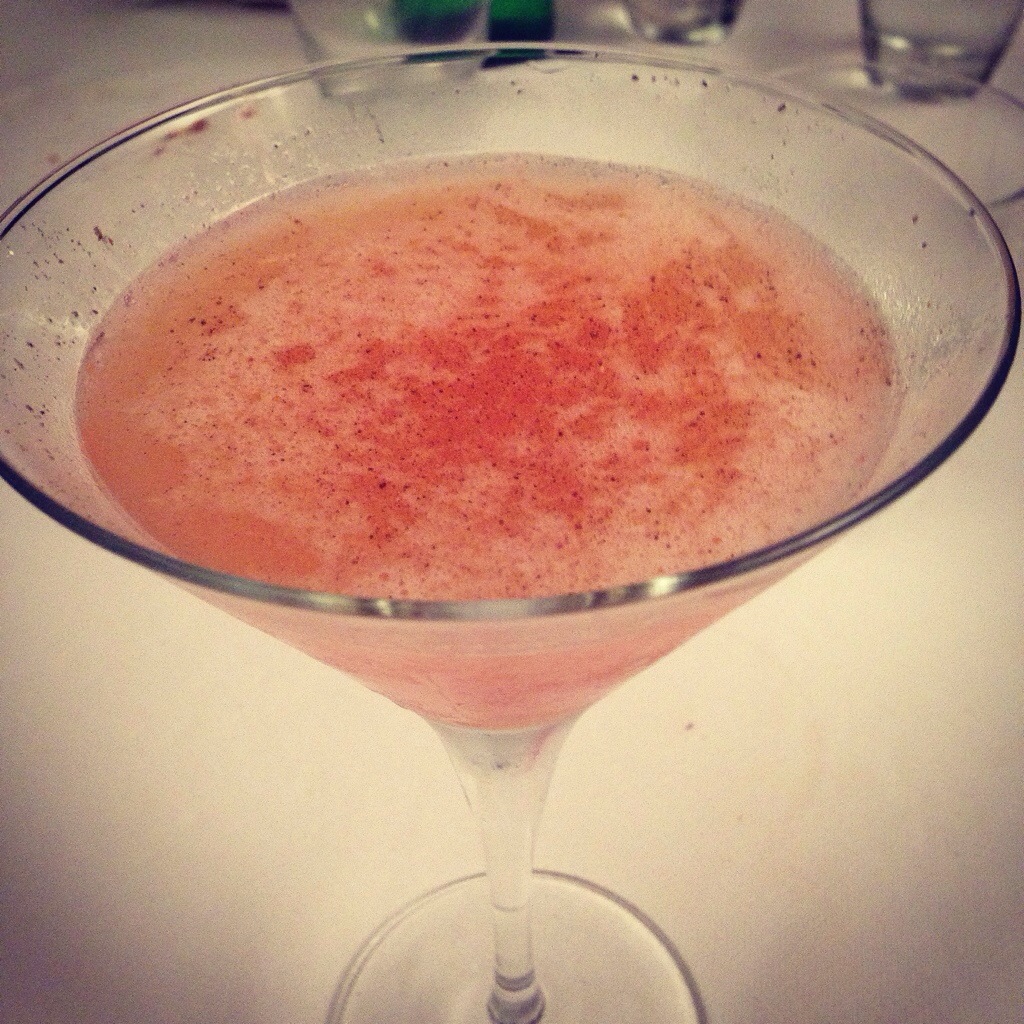 La Taverna Romana (Monti)
Monti is not an area I frequent often for dining but there are certainly some gems I know of that remain on my list of places to try. This place is your classic trattoria romana. Casual service, local produce and simple menu. The tonnarelli (long spaghetti type pasta) aglio, olio, peperoncino e pecorino (garlic, oil, chilli and pecorino cheese) is a prime example of the simplicity and efficacy of Italian cuisine. Other roman classics like the Saltimbocca are also quite good. 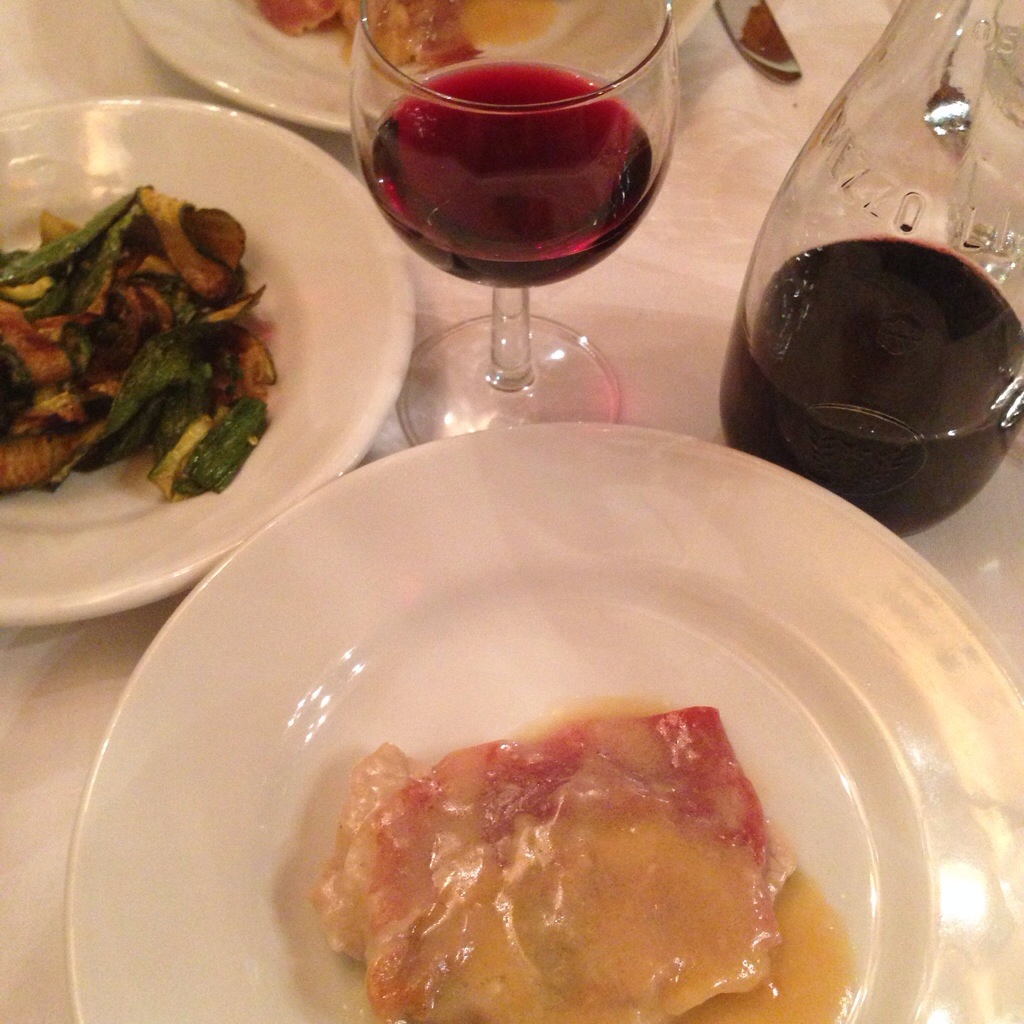 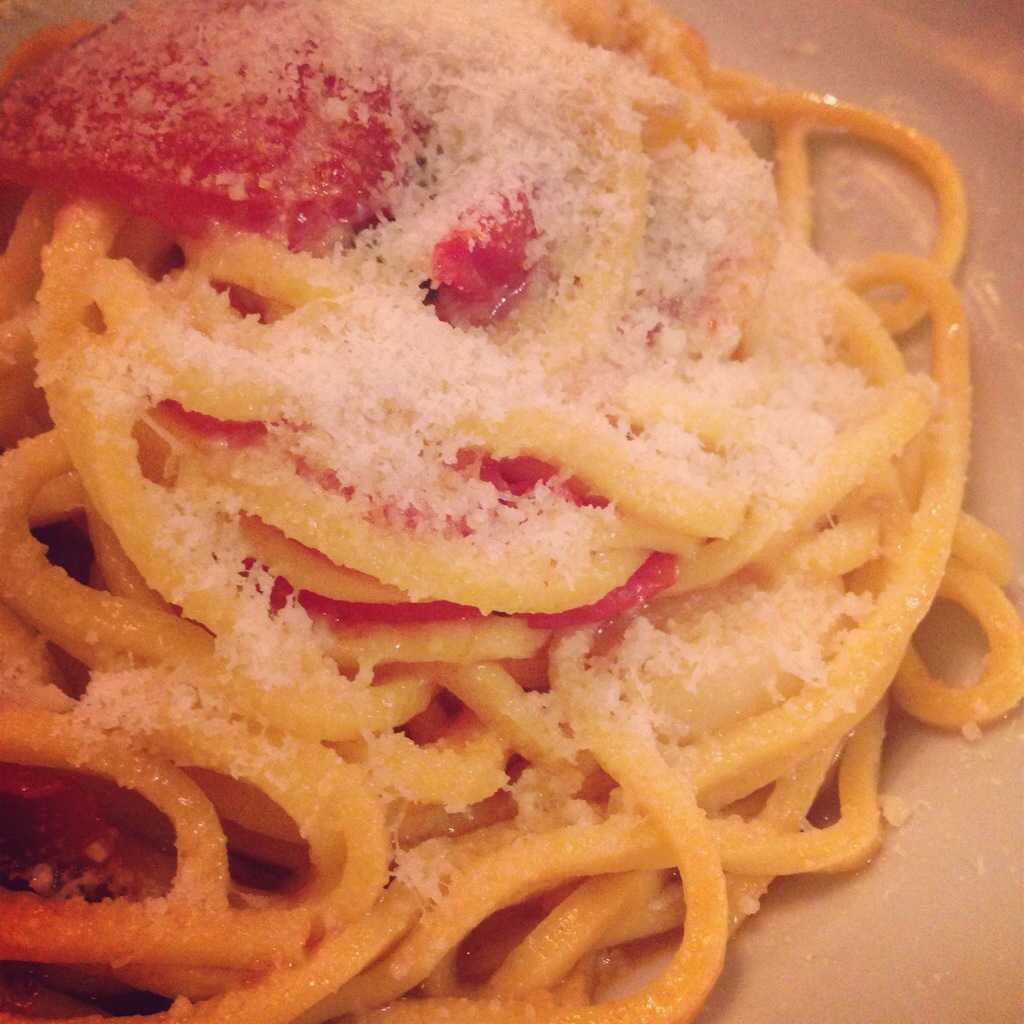 Da Remo (Testaccio)
Ask many Romans where the best place to eat pizza romana is and they’ll probably say Da Remo. I always say their only downfall is that the managers are laziale (Lazio supporters are Roma fans’ enemy!). The pizza is just perfect especially the classic margherita. Super thin and a little charred like pizza romana should be. Other dishes like their fritti (fried food) including stuffed zucchini flowers and baccalà (salt cod), eggplant parmigiana are also great and seasonally, I love their puntarelle (locally grown endive). All desserts are homemade and the pannacotta is quite good. 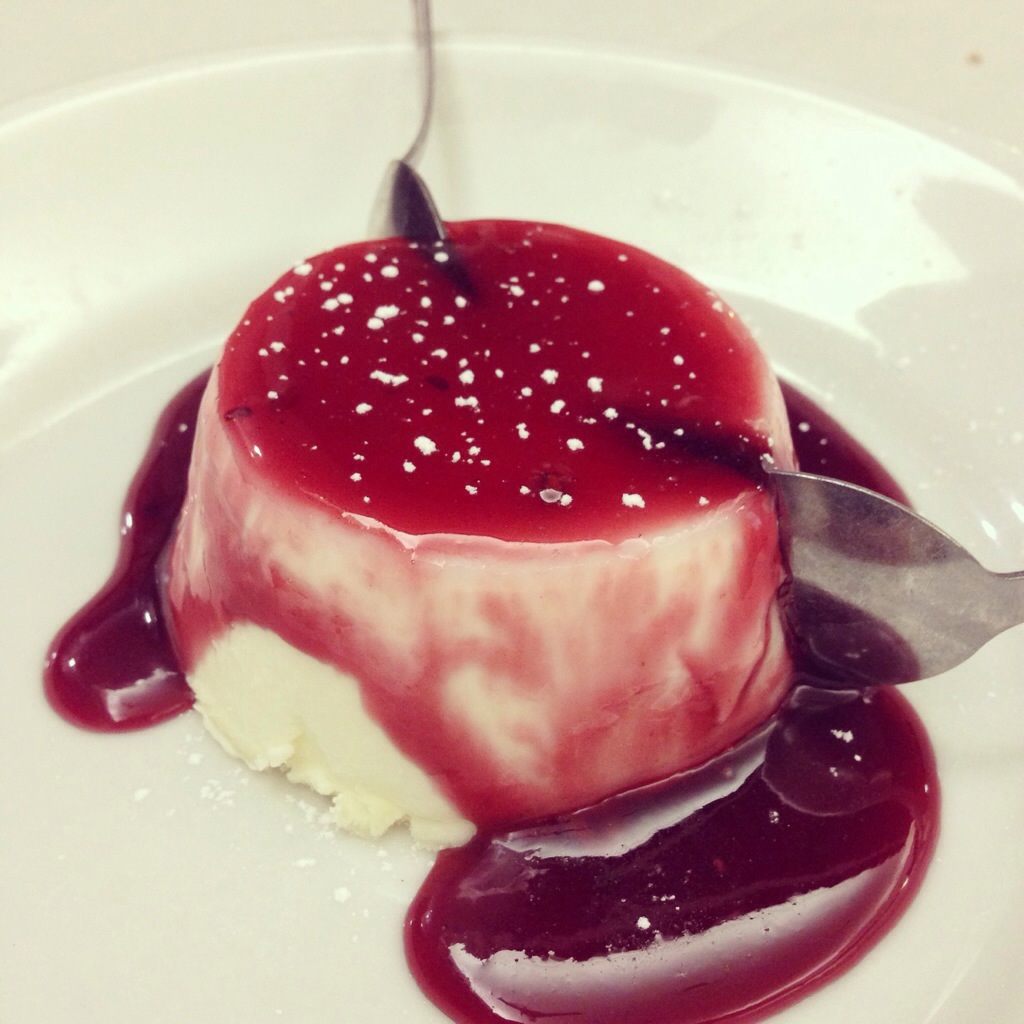 Il Bar Sotto il Mare (Prati)
When you think roman trattoria or cucina romana you probably don’t automatically think seafood. Yet, as the owners of this place say – historically, Rome was a port and essentially, Fiumicino and other coastal cities renowned for fish, are just ‘up the road’. So Romans also know how to cook fish. And cook it well, here they do! Walking into this old roman fish trattoria you feel like you’re at someone’s house. It will take you back decades but the food will blow you away. There is so much variety, think some 10-12 first courses of seafood pasta – all fresh, all seasonal. One of their house specialties is the branzino (seabass) wrapped in lard and stewed in a white wine sauce. I’m dying to go back just for this dish. Their crudi (raw fish selection) are fantastic especially the scampi. And I had a ricotta and pear tart that tied up my meal perfectly. 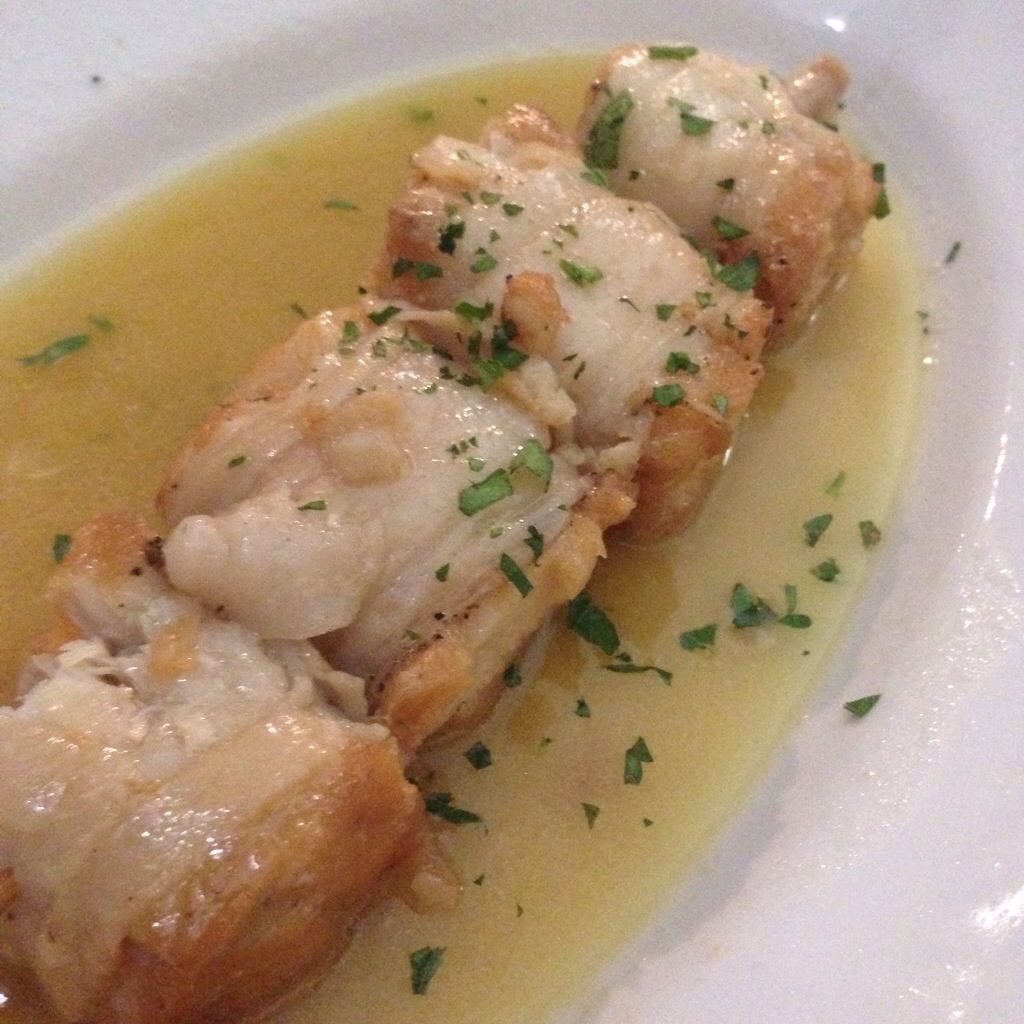 Propaganda (Colosseo)
Rome cocktail bar meets meets French style brasserie / bistro . Propaganda is great for aperitivo, cocktails, lunch, dinner, after dinner.. You’re getting my point right? It’s great anytime. Their menu (in large A3 newspaper style) changes regularly but some of my favourite dishes of late include the cacio e pepe (pepper and pecorino cheese) filled ravioli pan fried in butter and served with crispy guanciale (pork cheek) and their vegetable dishes like eggplant parmigiana or eggplant croquettes and ricotta stuffed zucchini flowers. But my all time favourite dish here is (surprise surprise) their chocolate dessert. Served hot, this self saucing dark chocolate fondant is literally my heaven. 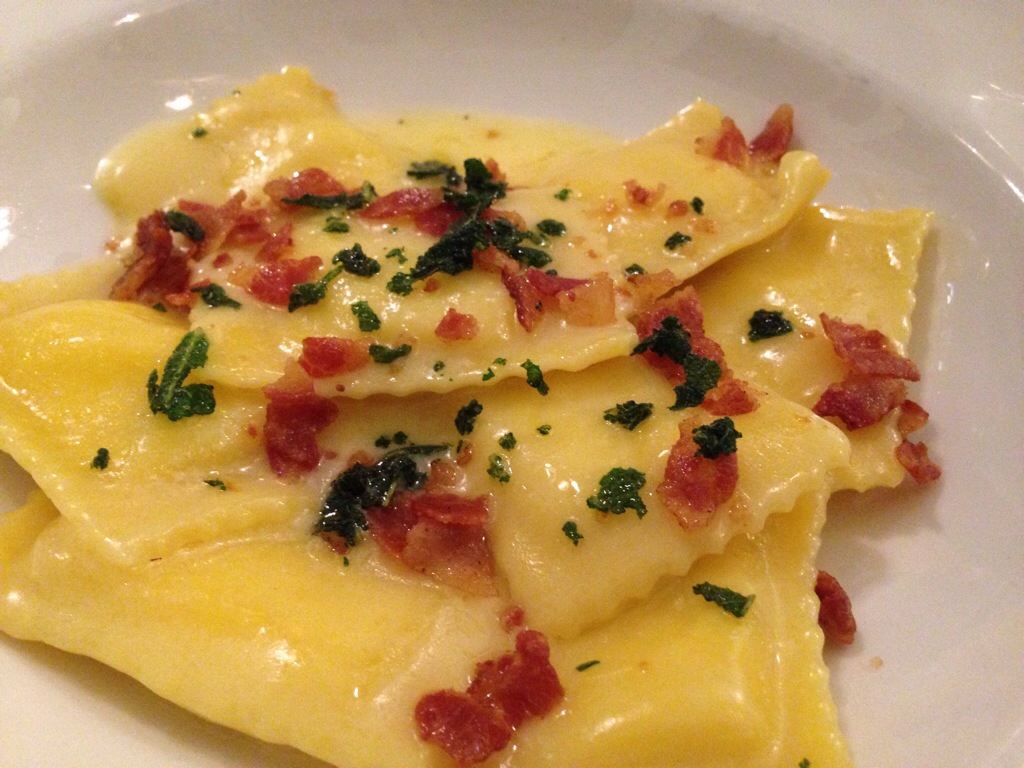 La Dogana (Ostiense)
This Asian inspired food hall is 1600 square meters of dining space and food. Opened early this year it’s created a buzz amongst locals in the Ostiense area. Given the state of the Italian economy, the all-you-can-eat concept is on the rise in Rome and boy does this place get packed. It feature a varying range of all you can eat Mongolian, Chinese and Japanese dishes, a dumpling station, sushi area and a grill where you can choose meat, poultry or fish cooked express for you. 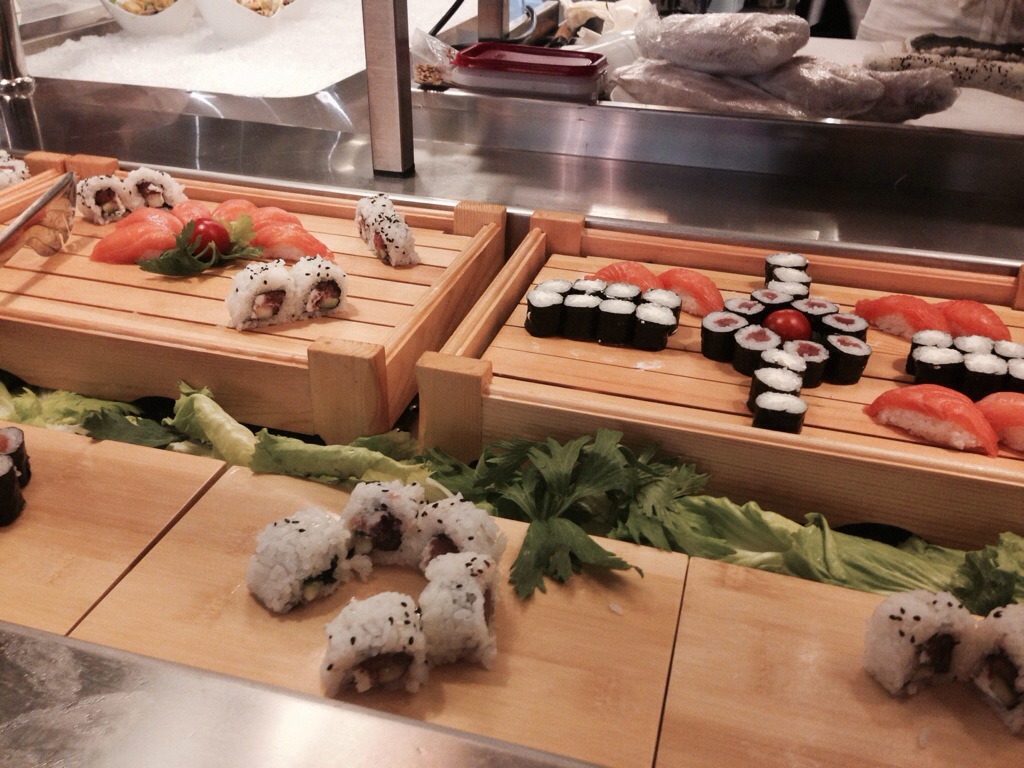 SushiSen (Ostiense)
One of the cities most reputable Japanese restaurants, SushiSen by roman standards is a little pricey. But it’s worth it. The pan fried meat dumplings and the prawn and ginger ones are divine; prawn tempura hand rolls delicious; and there is a selection of desserts that includes green tea tiramisu (which would’ve been lovely if I was actually a fan of green tea!) 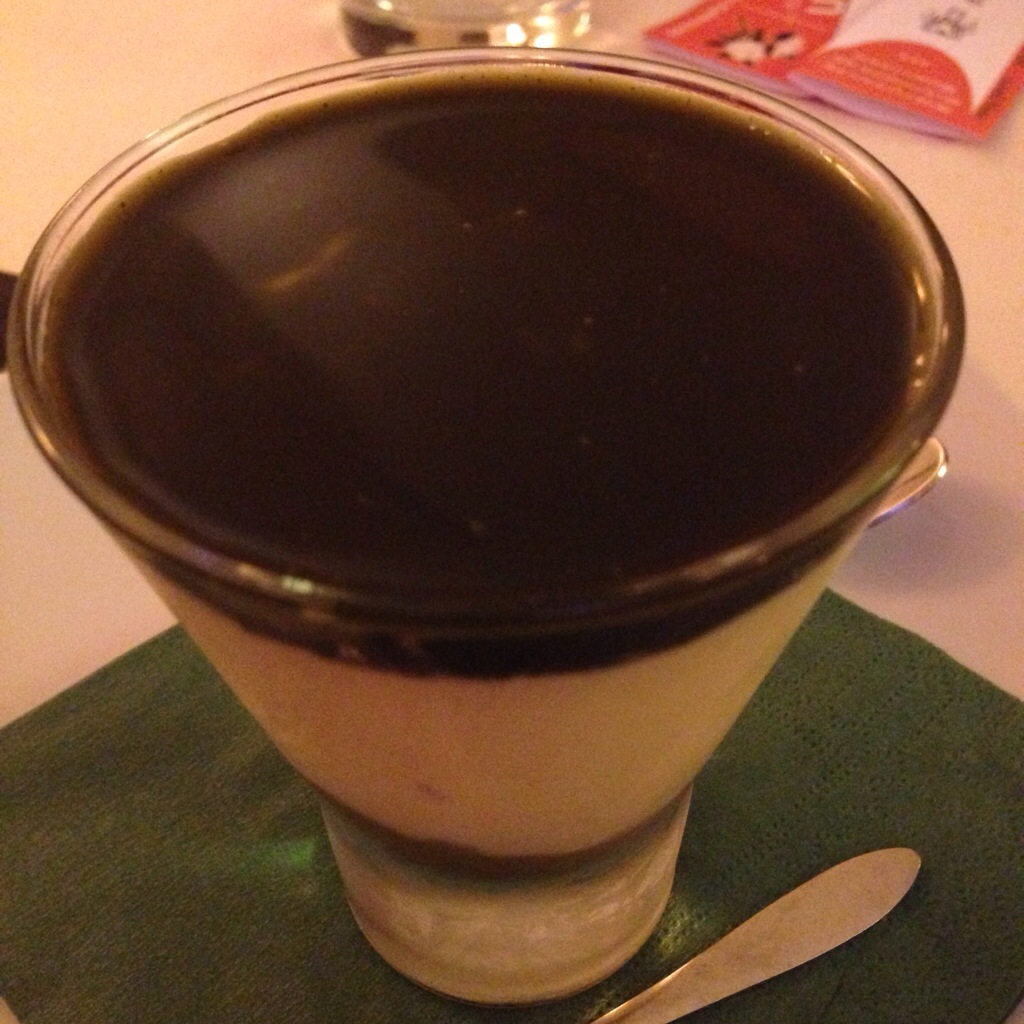 Frizzo (Prati)
“Where do you want to go today?” is Frizzo’s slogan. Their style and menu aims to take you away from Rome and features a predominantly American inspired menu including club sandwiches, eggs benedict, fries, salads and sweets like carrot cake in a jar, New York baked cheesecake and cupcakes. Now, the eggs benedict aren’t to Melbourne standard but this is Rome not Melbourne! It’s one of many restaurants part of a wave of all-day dining which until recently was quite rare in Rome. Great for aperitivo, brunch or even late night snacks and located near the Adriano cinema complex, it’s great for a pre or post film drink.

Signing off from Trastevere
(with a dining wish list that continues to grow!)
Baci, Maria