A BIG thank you to everyone for the messages of concern over the riots that sadly took place in the centre of Rome yesterday.

I’m obviously ok and was not affected – other than having to walk about 40 minutes from one side of the city to my apartment because of road closures and major disruptions to the metro and all transport.

As I hadn’t caught the news for a couple of days, I only heard about the planned demonstration through my Australian cousins who are travelling through the city – they received an Australian DFAT message warning them to exercise caution.

With details of where the protest was taking place, we of course knew where not to venture. Their morning tour was unfortunately disrupted in that they were not able to enter the Colosseum as it was closed for obvious security reasons like many other main sites in the city.

This demonstration had been planned for months with Italians travelling hours from north and south to participate. Participation numbers were estimated between 150,000 – 200,000.

It commenced peacefully at 2pm but then got out of hand as the black bloc (rioters made up mainly of university aged men masked in black) stormed the 5 star Exedra Hotel in Piazza della Reppublica and began setting fire to government buildings. They then moved through the city to the Colosseum and Cavour areas before heading to Piazza San Giovanni to torch police vans and bins, vandalise cars and smash bank and shop windows – throwing cobblestones at anything and anyone along the way. Damage to the city is estimated to be worth at least €1M. 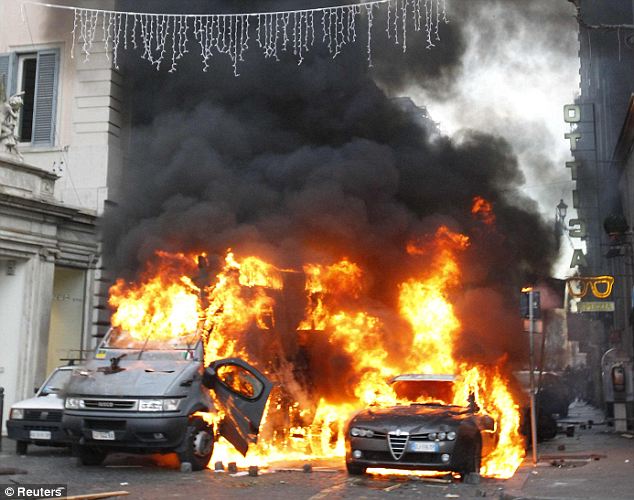 More than a few blocks away and oblivious to these events, we were shopping and even stopped for afternoon tea! It was quite eerie on the streets because despite the number of tourists around, it was quiet and there was a massive police presence. To be quite honest, we only realised the gravity of the situation at about 6:30pm when I attempted to get a taxi home. Told that most major roads were closed across the city, I headed back with my cousins to their hotel on Via Nazionale. On entering the hotel, we were in shock at the live and continuing news coverage of smoke rising from the city. It was shocking and quite sickening to watch the violence live on TV knowing that it was taking place only about 2kms away!

Upon informing myself about which roads were open and what transport options were available (Carabinieri always happy to stop and chat to a female on the street!) it was decided that my best bet was to walk across town to get home and that’s exactly what I did. Again, the sense of quiet in the city as a result of the mass street closures was so strange and un-Rome like.

Violent events such as those that took place in Rome and across the globe yesterday seem likely to continue as public desperation grows in a world facing a worsening global financial crisis.

Taking to the airways last night, Rome’s mayor Gianni Alemanno said, “It seems that today in Rome we’ve seen the worst [violence] in all of Europe. (But) I was very impressed by the reaction of the majority of the protesters. Never before have there been cheers when the police intervened.”

Judging by comments I’ve seen on various blogs and social media in the last 24 hours, many of the protest’s young sympathisers share the Mayor’s analysis, condemning the violence as counterproductive. Indeed, it seems that even the rest of the protest movement around the world has looked on the Roman violence with dismay.

I understand and empathise with the cause. In fact, I’ve seen with my own eyes here the effects of a crisis that to a certain degree has not been felt nearly as profoundly back in Australia. While, Italian frustrations are much like those felt around the world (even though I often joke about how they complain about the GFC at a ridiculous rate) the economic crisis has pinched hard here where growth has been stagnant for more than a decade. In particular the youth here (an estimated 30% of whom are unemployed), are out of patience with a government that has no legislative or policy consensus and has spent the past year lurching from crisis to crisis, coming together long enough only so it could pass a series of unpopular budget cuts and tax hikes through the Parliament!

BUT the violence that ensued yesterday and how the city will recover from it has now unfortunately become the story. If impacting the political agenda was the intent of the rioters, they sorely failed; violence, terror and widespread public condemnation their only achievement.

So – after the smoke dissipates. After the city has been cleaned up. Really, after all is said and done, all that remains here is a sickening sense of unnecessary violence and fear of it occurring again in the not too distant future. And have governments, banks and corporations around the world been influenced at all? Well, sadly they continue today business as usual.

Well friends, hopefully this is my first and last political blog rant! And on a much lighter note – the area hit worst by the riots is where Bar Pompi is located. If you have read my previous blogs, you will know that this is the bar with Rome’s famous tiramisu. I have not yet heard if the venue sustained any damage, but should this come to my attention, you may well hear of further riots instigated by yours truly. Just saying.

Some footage of yesterday’s riots if you didn’t catch it: http://www.youtube.com/watch?v=1HgjUr0cY3M

This website uses cookies to improve your experience while you navigate through the website. Out of these, the cookies that are categorized as necessary are stored on your browser as they are essential for the working of basic functionalities of the website. We also use third-party cookies that help us analyze and understand how you use this website. These cookies will be stored in your browser only with your consent. You also have the option to opt-out of these cookies. But opting out of some of these cookies may affect your browsing experience.
Necessary Always Enabled

Any cookies that may not be particularly necessary for the website to function and is used specifically to collect user personal data via analytics, ads, other embedded contents are termed as non-necessary cookies. It is mandatory to procure user consent prior to running these cookies on your website.