Sicily is one of my favourite regions in Italy for food. While so many regions have unique culinary traditions borne from rich local produce, there’s just something about Sicilian cuisine that makes my mouth water even just writing about it! Culturally diverse, the cuisine has Greek, Middle Eastern and African influences and changes from city to city, town to town.

On the island’s south-west coast, Agrigento’s cuisine is about as delicious as the scenery. With a significant Greek influence, some staples of the diet include pistacchio, sardines (it’s on the coast after all, so the seafood is standout!), eggplants and olive oil.

Many dishes, from pasta to seafood are seasoned with a local basil that’s slightly sweeter and more delicate than the regular variety. One things for sure – you won’t leave hungry!

Here’s what you should try throughout the region and what you’ll find in Agrigento in particular.

The pistacchio that grow in Sicily are slightly longer and thinner than those usually found in the Middle East and have a stronger taste. Together with almonds, they can be found throughout and are used in both savory and sweet dishes. From pasta and arancine to coasting on cannoli (especially pistacchio). Pasta di mandorla or pasta di pistacchio is a paste used to make biscuits and cakes and can be found in any bakery or pasticceria. Pictured is pasta di pistacchio and a pistacchio semi freddo.

Said to have originated in eastern Sicily under Arab rule (around the 10th century), the name arancine is derived from its colour and shape (it means orange things). They are fried rice balls and while they’re readily available as a delicious street-food snack all over, the ones in Agrigento are usually stuffed with anything from meat ragú to saffron, prosciutto and mozzarella. 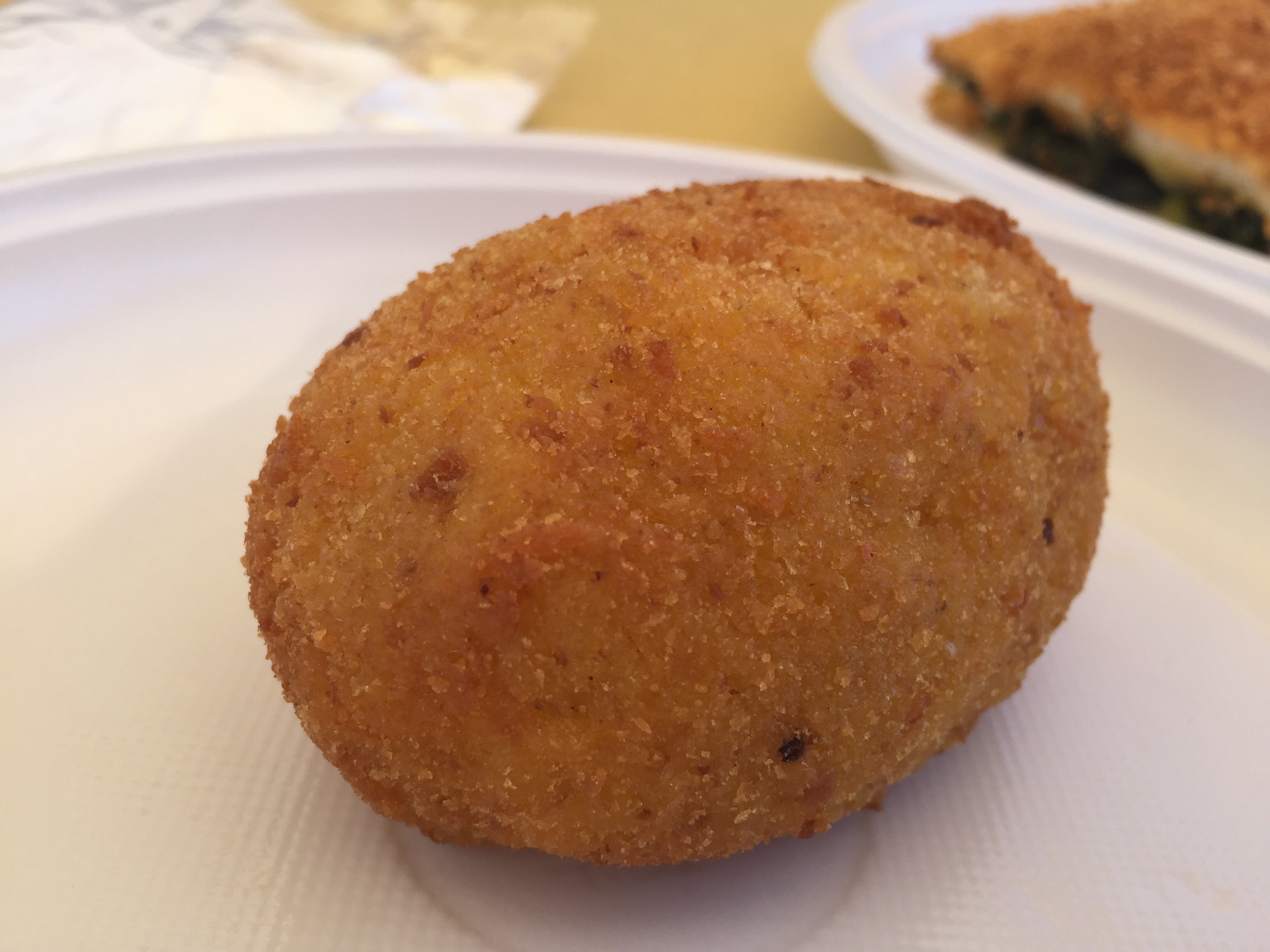 Sfincione is a traditional Sicilian style pizza that originates from Palermo. In Agrigento, it’s kind of like a focaccia bread and the filling is usually meat or spinach and ricotta. It’s square in shape and baked golden with a bread crumb topping. 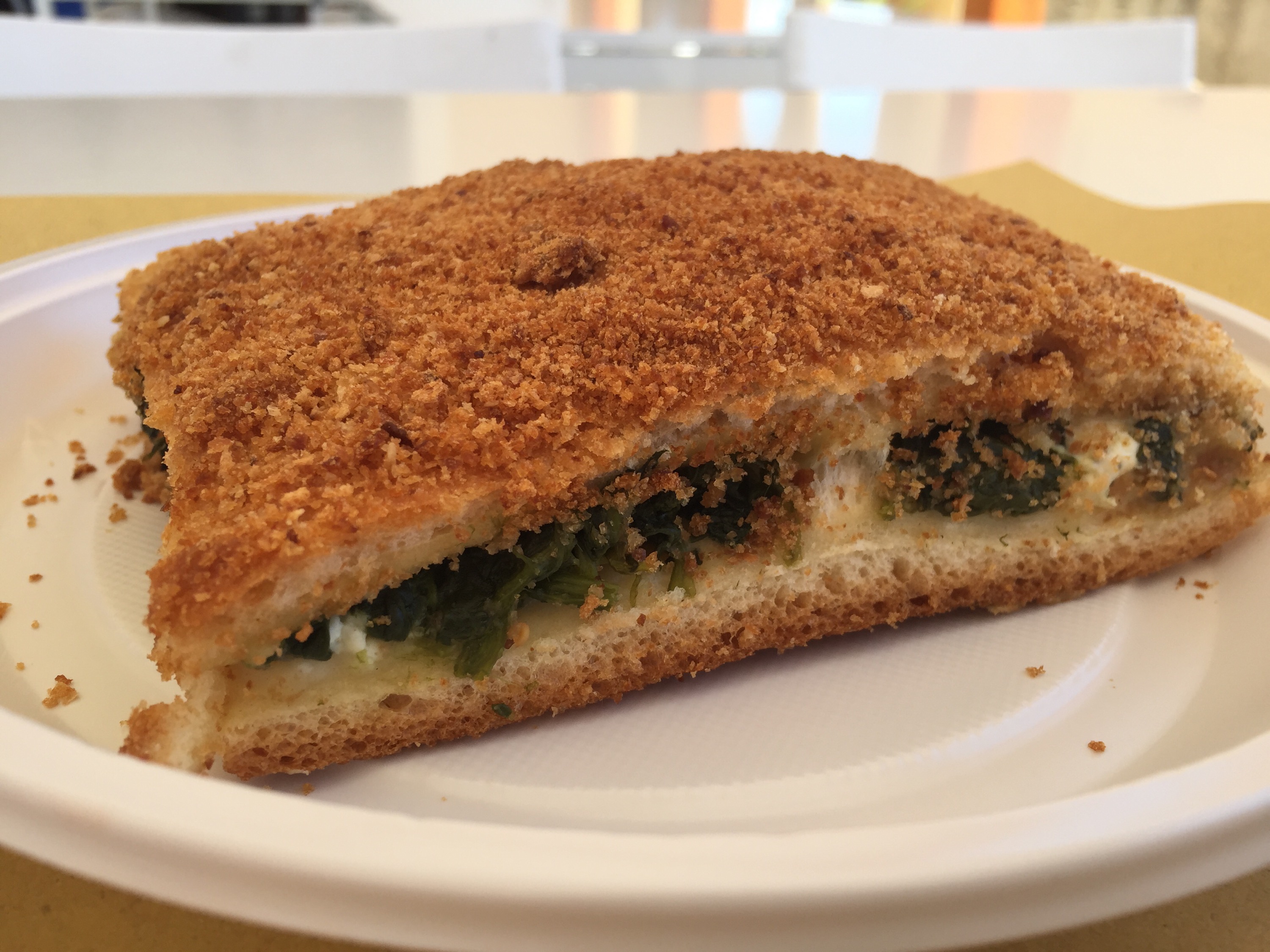 Also from Palermo (I just about are only these when I was last there!) panelle are fried chickpea flour fritters and they are addictive. Around these parts, people also eat them in a panino! 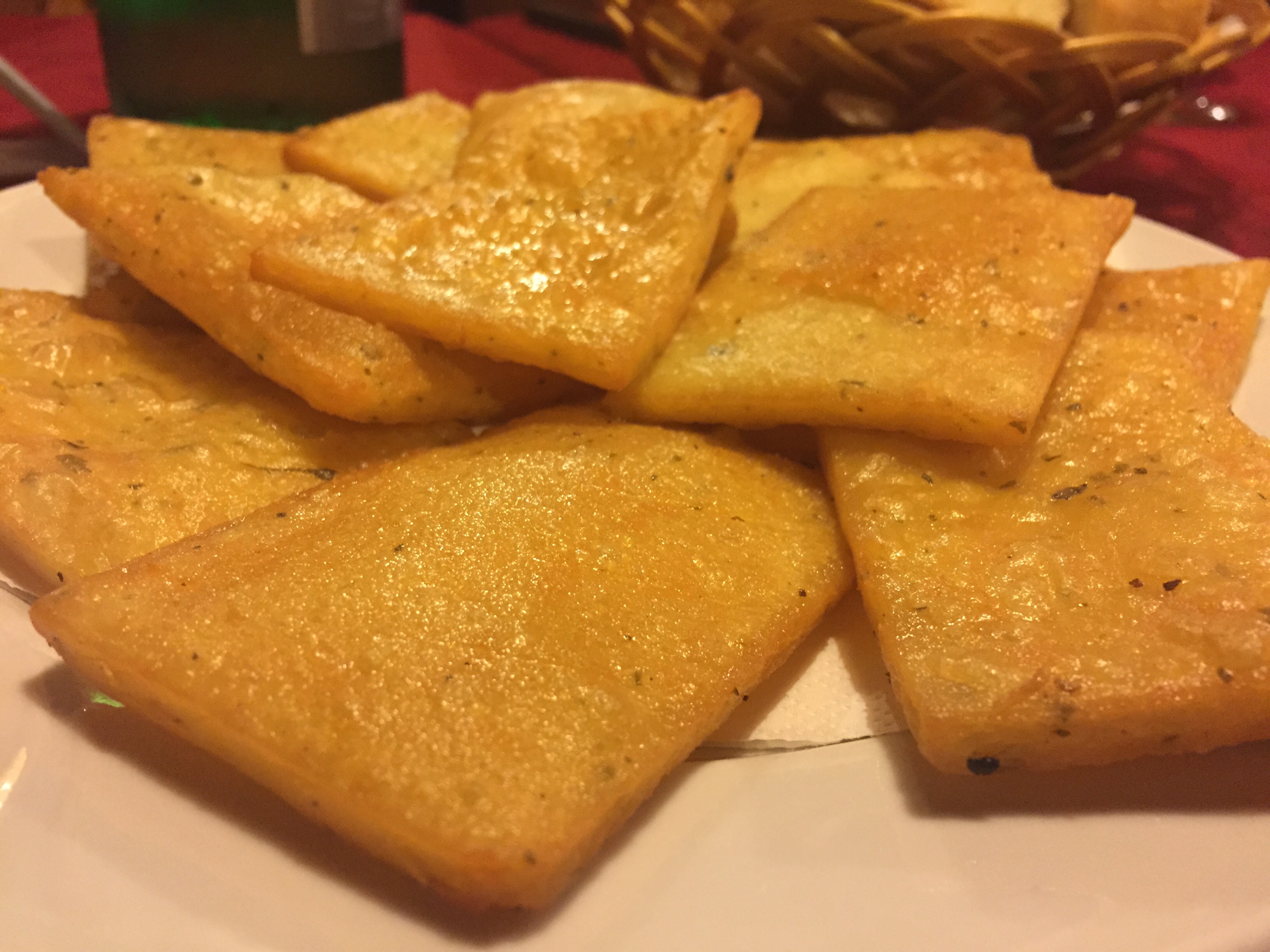 While pasta alla norma is a popular Sicilian pasta served with a rich tomato sauce, eggplants and baked ricotta, in Agrigento have their own variety. Pasta alla Agrigentina replaces the ricotta with fresh mozzarella.

There would be a problem if you couldn’t source good seafood on the coast. And Sicily is surrounded by coastline. I ate the most amazing spaghetti alla vongole (with clams) on Catania beach at a beach shack slash trattoria named Trattoria del Sole (Lungomare Kennedy 27) en route to Agrigento. Other mouthwatering local specialties to try in Agrigento are sardines. They melt in your mouth. Sarde alla Beccafico is a popular one and is two crumbed and fried sardines sandwiched together with a stuffing of lemon zest, raisins, parsley and pinenuts. They. Are. To. Die. For. Polpette di Neonata are fried whitebait  patties. I tried both of these at Agrigento’s La Trizzera (Via Fosse Ardeatine 19). 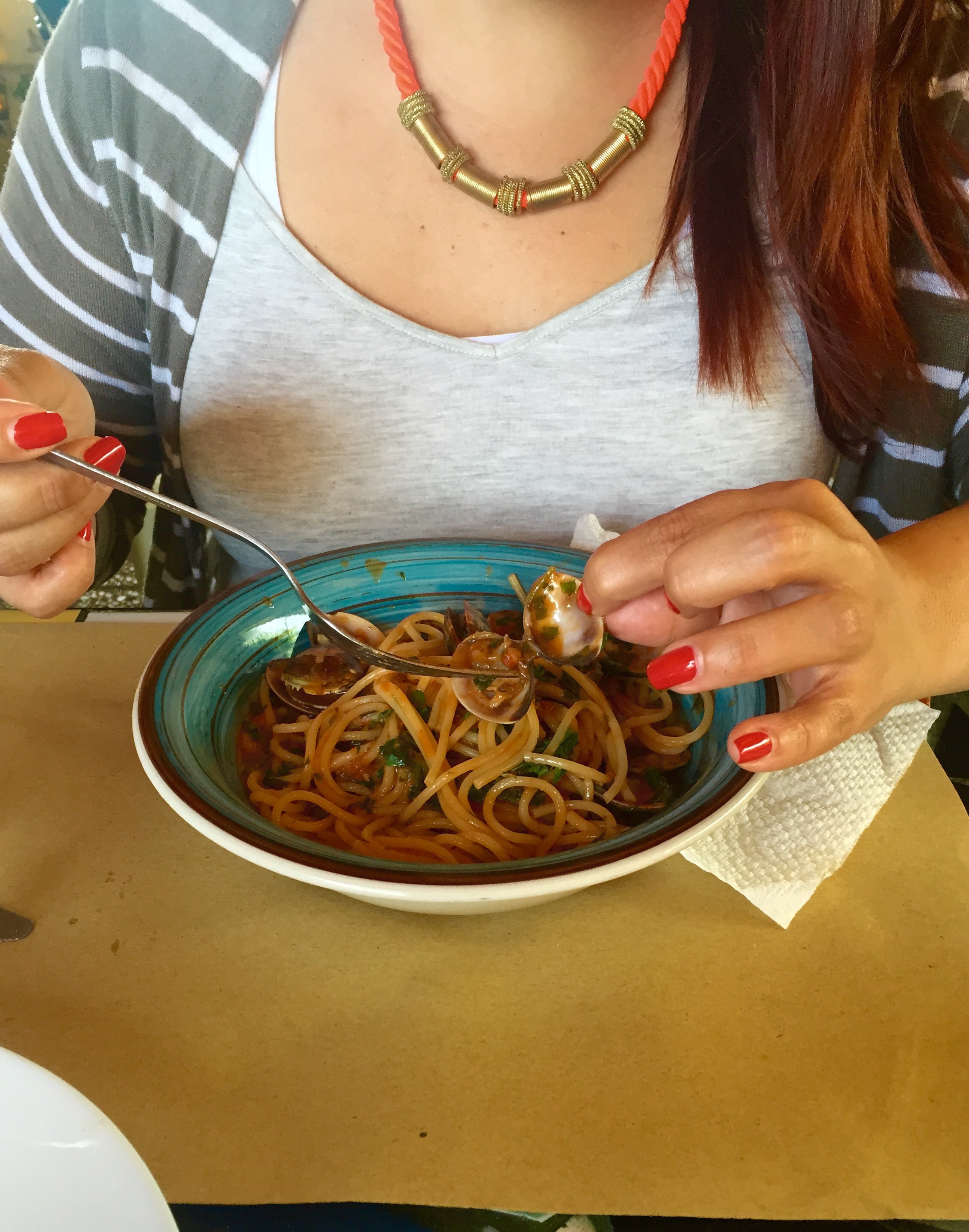 Sicilians have been making (and eating) cannoli for centuries. Fried tube-shaped shells of sweet pastry they are usually filled with ricotta which is a staple in the local diet. The authentic way to eat cannoli is to have them piped express with ricotta so that the shell remains firm and crisp. In Agrigento, Bar Gambirinus (Via Atenea 170) and Pasticceria Infurna (Via Atenea 96) make some mean ones. 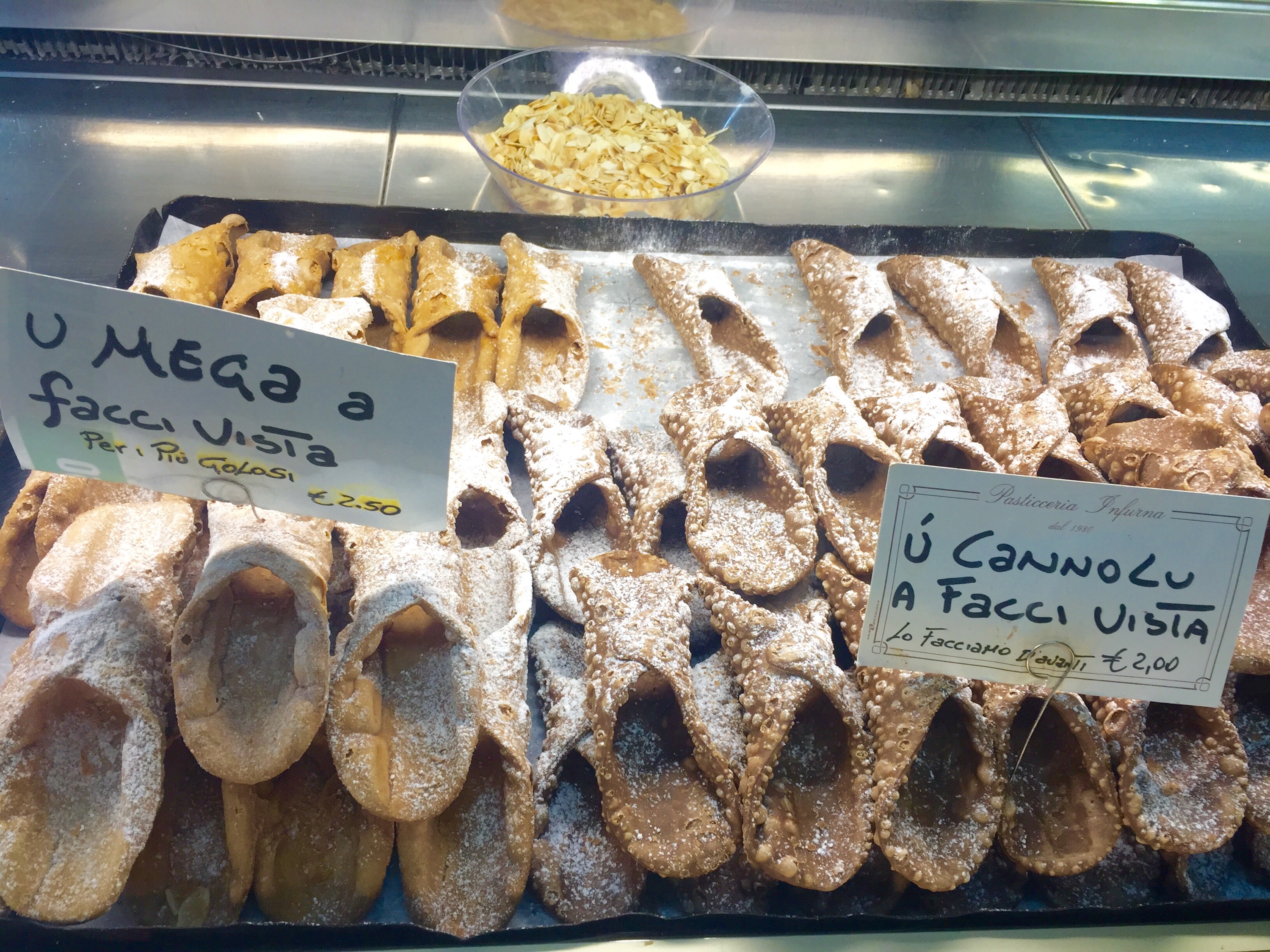 Desert and gelato are king in Sicily. Made fresh with local ingredients (ricotta is a favourite of mine!) look out for real-deal gelato that will never surpass the height of the tin. 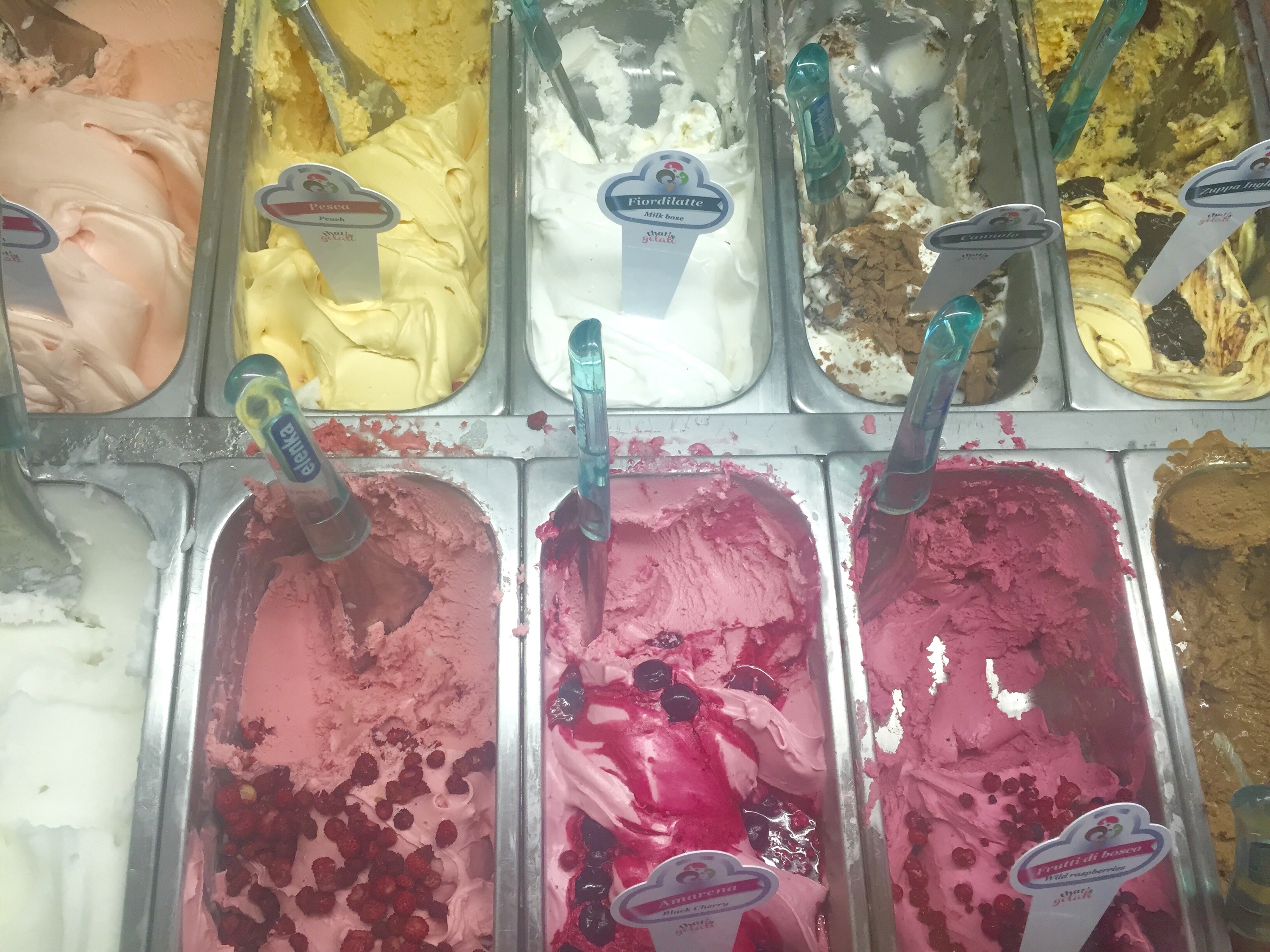 Most bars and pasticcerie make granita fresh every day. It’s a refreshing ice crush and is the perfect choice for those hot days. With such an abundance of lemons in the region, this is the most popular flavour. Around Agrigento, you can also find a gelsi version (local mulberries).

With a long history in winemaking, Sicilians are renowned internationally for their quality wines. Malvasia is a sweet wine and is often referred do as the nectar of the Gods. Nero d’Avola is a full bodied red that is often compared to Syrah (or Shiraz). Grillo is a popular white blend that is often blended with Chardonnay. The Grillo grape variety can withstand high temperatures and therefore grows well in Sicily. It’s also used to make the fortified wine, Marsala. As a pure Grillo, it now has DOC status in the form of Contea di Sclafani which is produced right in Agrigento.

Signing off from Trastevere (a little hungry and thirsty now, truth be told!)