If you don’t follow me anywhere on social media, haven’t read this blog before or have been living under a rock – newsflash: my Italian family heritage is Abruzzese. And not my great great grandparents or my grandparents (even though surprise surprise – they are from Abruzzo too!) I’m talking: my parents – both of them, born in Abruzzo. In a tiny town called Prezza in the mountains of L’Aquila province. They emigrated to Australia respectively in 1957 and 1968 but my paternal grandparents never did, so the ties to our family town never frayed. Not one bit. 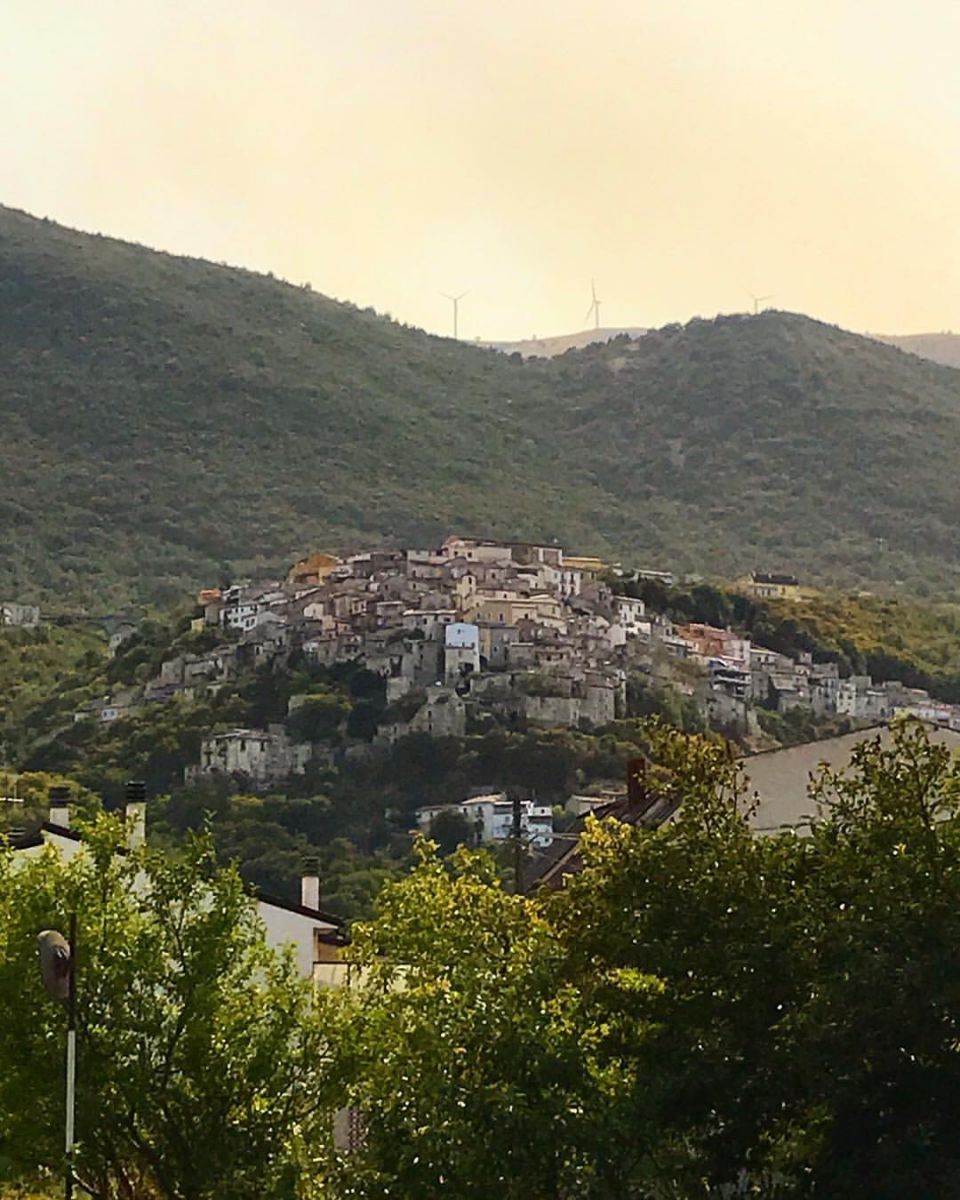 I attempt tirelessly to promote this region – dubbed the green gem of Italy – as much as I can. Because whatever you want, she’s got it! A dynamic cuisine that differs from the sea to the lakes to the mountains to the farm areas. UNESCO heritage sites. Medieval towns that rival Tuscan and Umbrian household names. An enviable ski season. National parks and mountain ranges. Lakes, waterfalls, natural springs. This could take a while.

For more about Abruzzo and why you should visit right now, you can read my article for CNN right here. 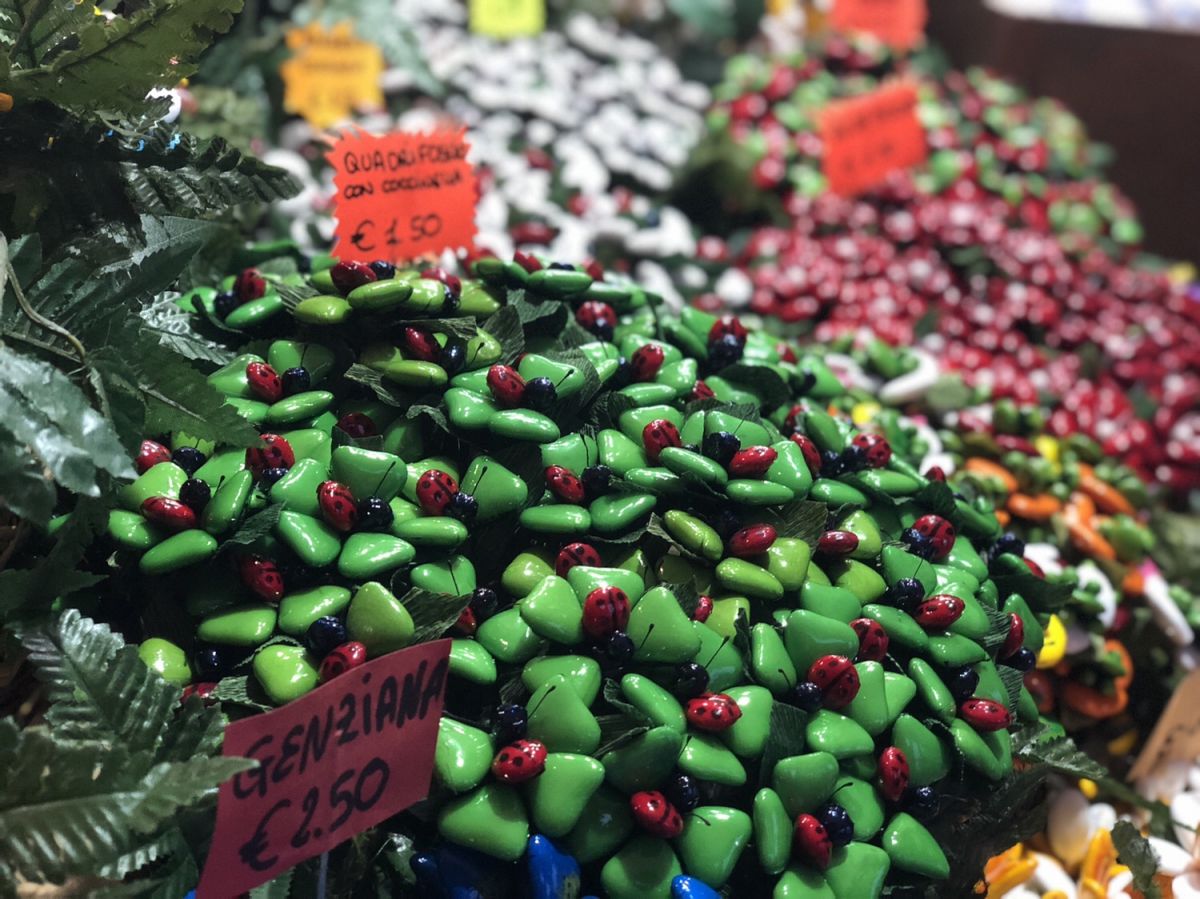 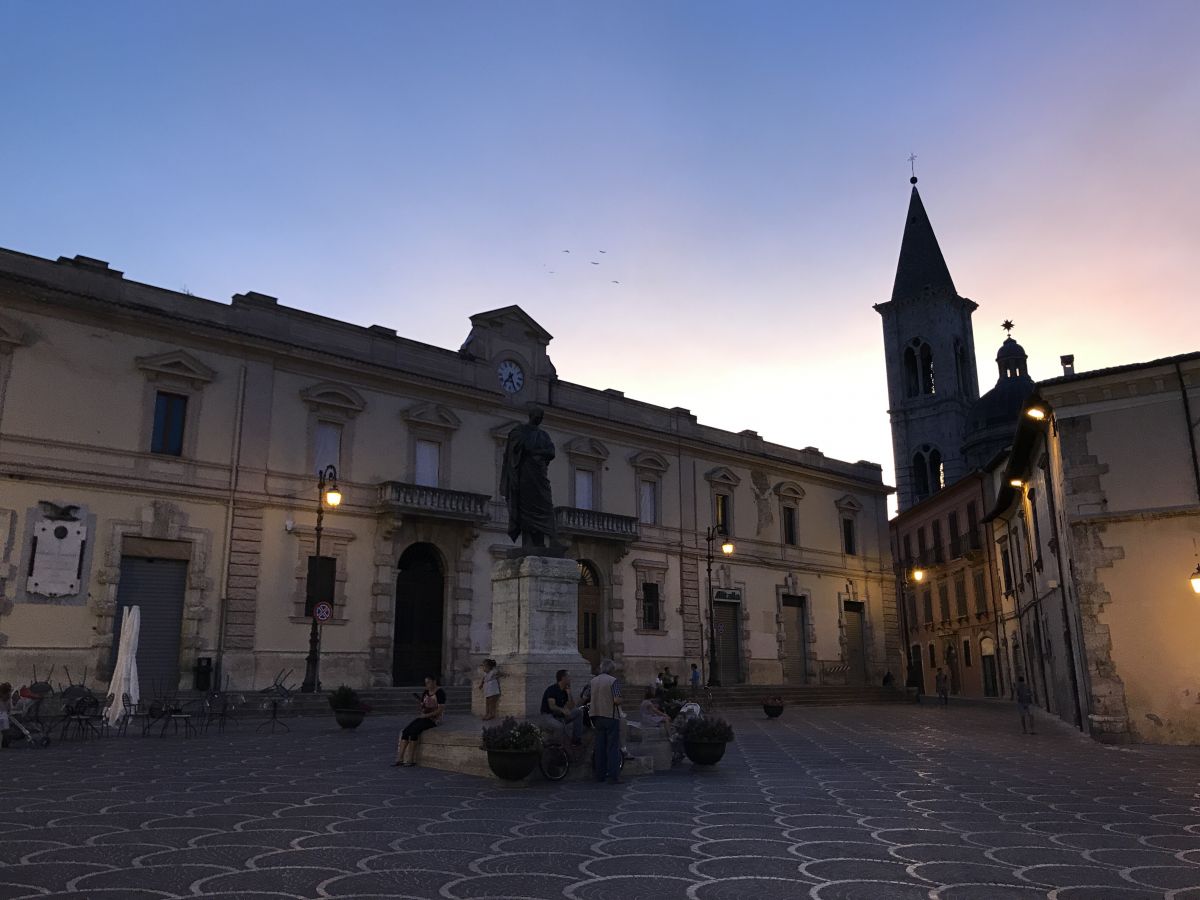 But I started writing this post because – by request and popular demand – I want to share a moving Easter tradition that has developed a cult-like local following across the region. It’s called, La Madonna che Scappa (the Virgin Mary who Runs) and again, by now you’ve surely heard about it over on my Facebook page or Instagram.

I love that Italy boasts such a fascinating collection of traditions born from cultural or religious events and in my opinion, they can be appreciated whether you’re a believer or not. You might have even enjoyed a tradition or two without even knowing about their tie back to the church because they are so entrenched in contemporary culture and also because – let’s face it – this country has a funny way of mixing things like culture, church and state anyway (but that’s probably getting a bit more political than I’d like for this blog!)

What I mean by this, is that many customs popular in mainstream and modern day cities like Rome for instance, can be traced back to catholic rituals and many people wouldn’t even know it. Like eating gnocchi on Thursday’s. Historically Catholics wouldn’t eat meat on a Friday’s and so for fuel, a carb-heavy meal was eaten the day before. Enter potato heavy gnocchi. Catholics and non love their lamb at Easter too. Some might not be able to tell you why but in Italy Easter comes at springtime (think new beginnings, baby lamb) and the ‘Lamb of God’ represents sacrifice. You get my drift.

Back to Madonna! (And not the Immaculate Collection one – although coincidently she has Abruzzo roots too!) I mean the Easter slash running one…

La Madonna che Scappa is held in towns across the Valle Peligna in L’Aquila province, and re-enacts biblical scenes of the Virgin Mary finding out Jesus has in fact risen from the dead.

The procession varies slightly from town to town but on Easter Sunday usually after morning mass, statues of Mary and Jesus are carried out of the church by locals (a privilege for them to be selected) and proceed to a piazza or open space. With Mary at one end and Jesus at the other, angels (often primarily school age children) run to tell her that Jesus is in fact alive. They do this 2-3 times until finally she is convinced. At this point, the grieving mother’s veil comes off, doves fly and she ‘runs’ toward her son to embrace him in disbelief.

This year and last, I saw it in Prezza my family home town and while I’ve seen it in two others, for sentimental reasons it remains my favourite (for years my dad told it was the best and I thought it was just his usual ‘back in my day’ bragging. Here are some shots: 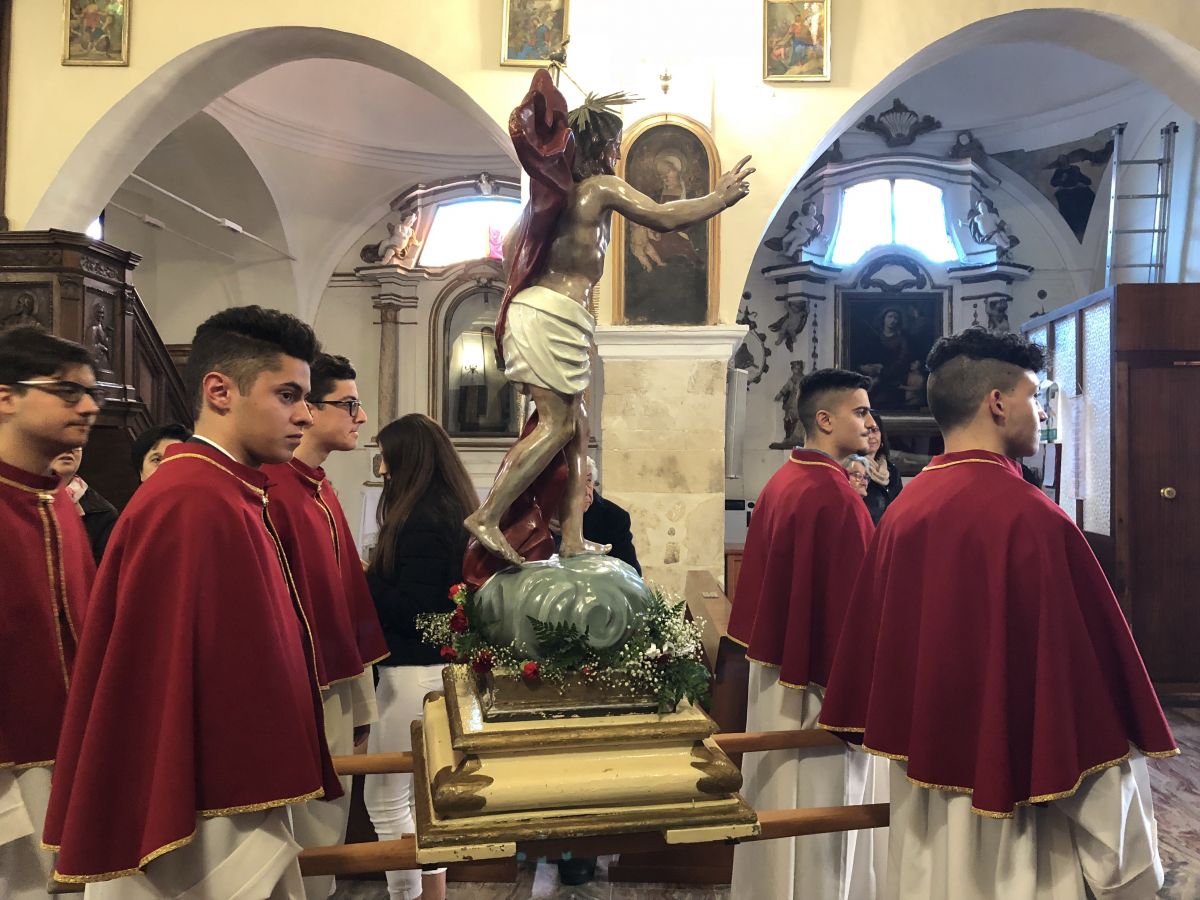 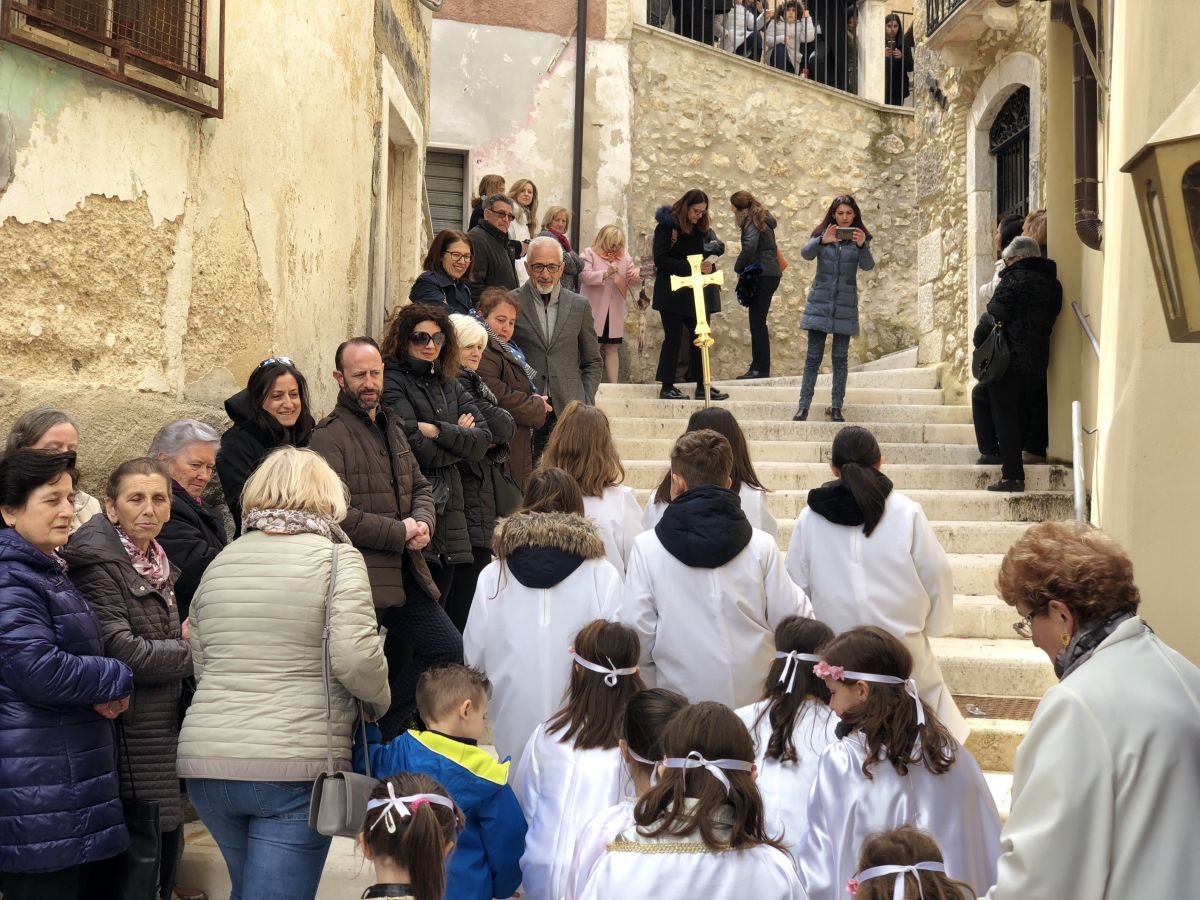 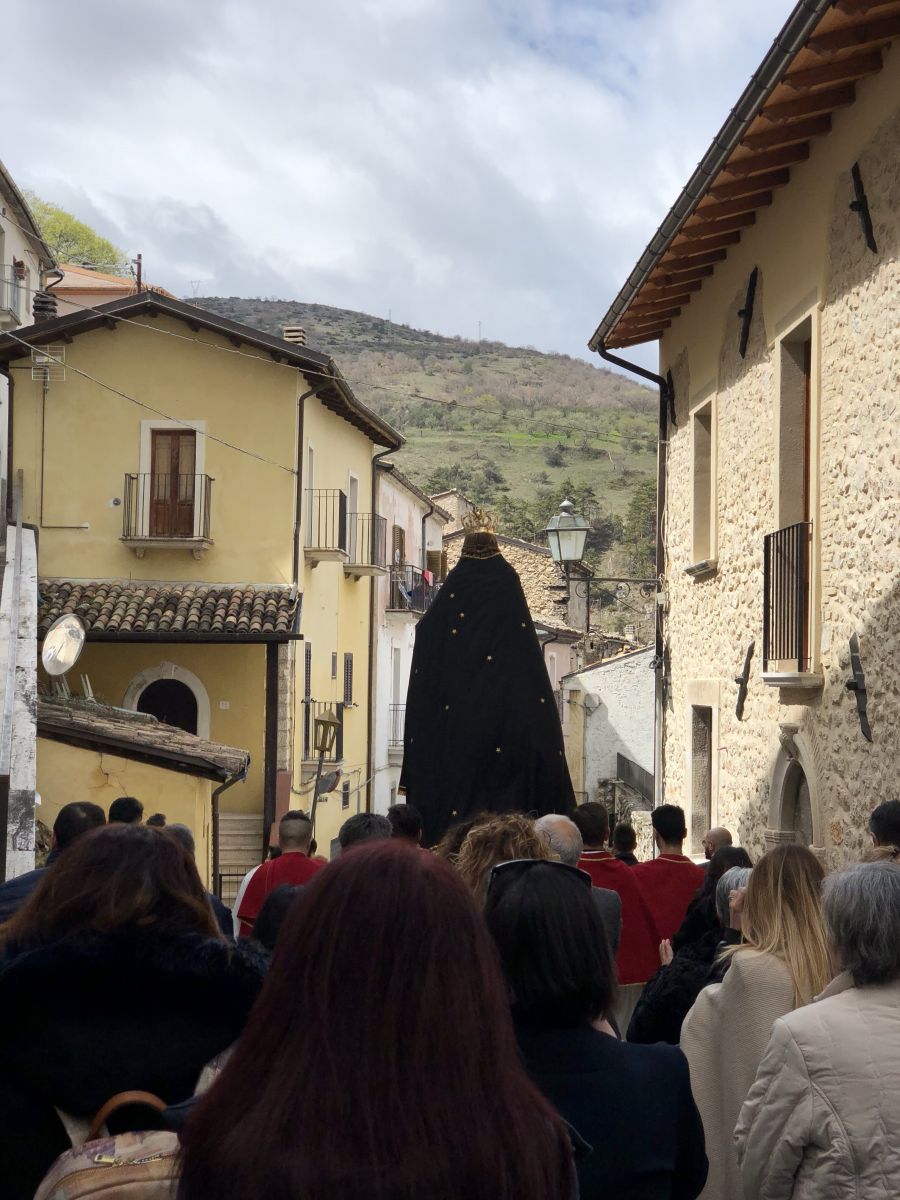 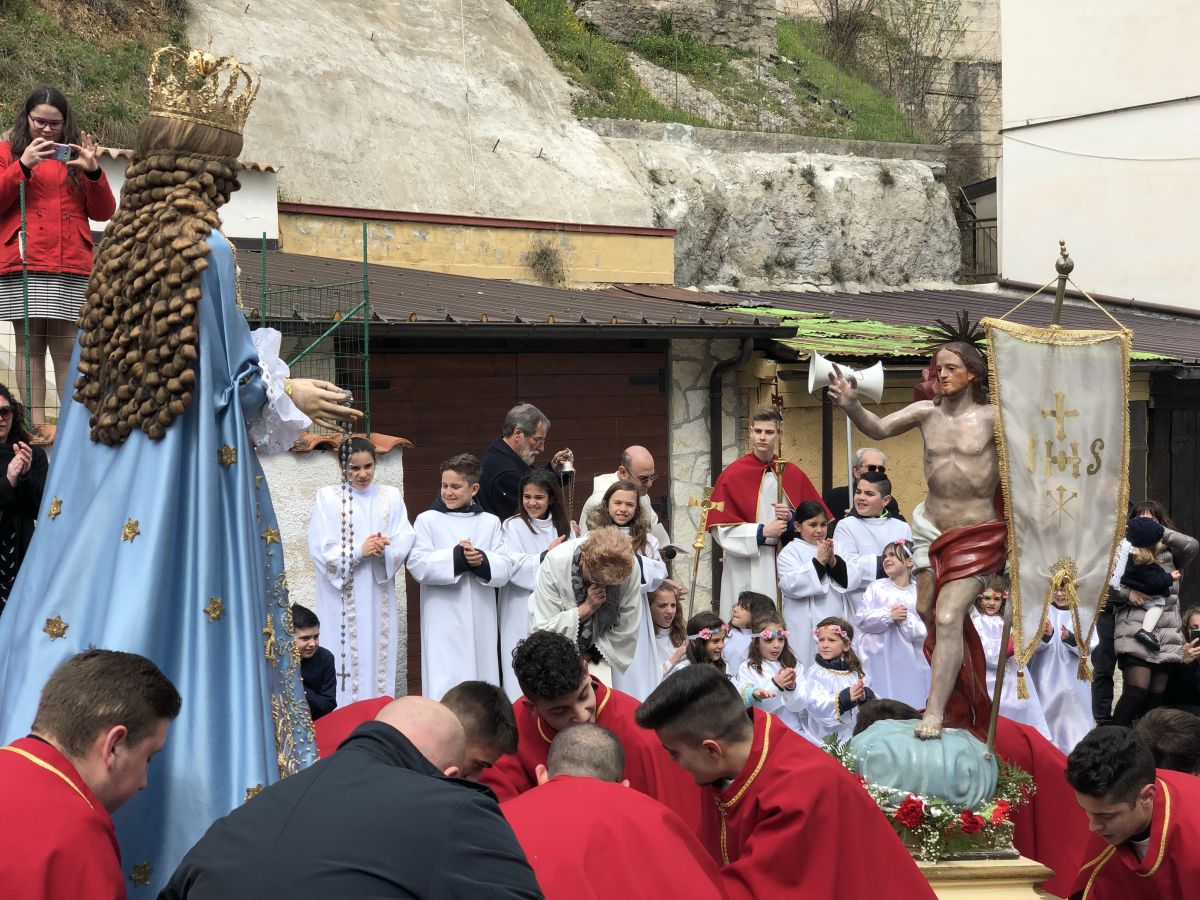 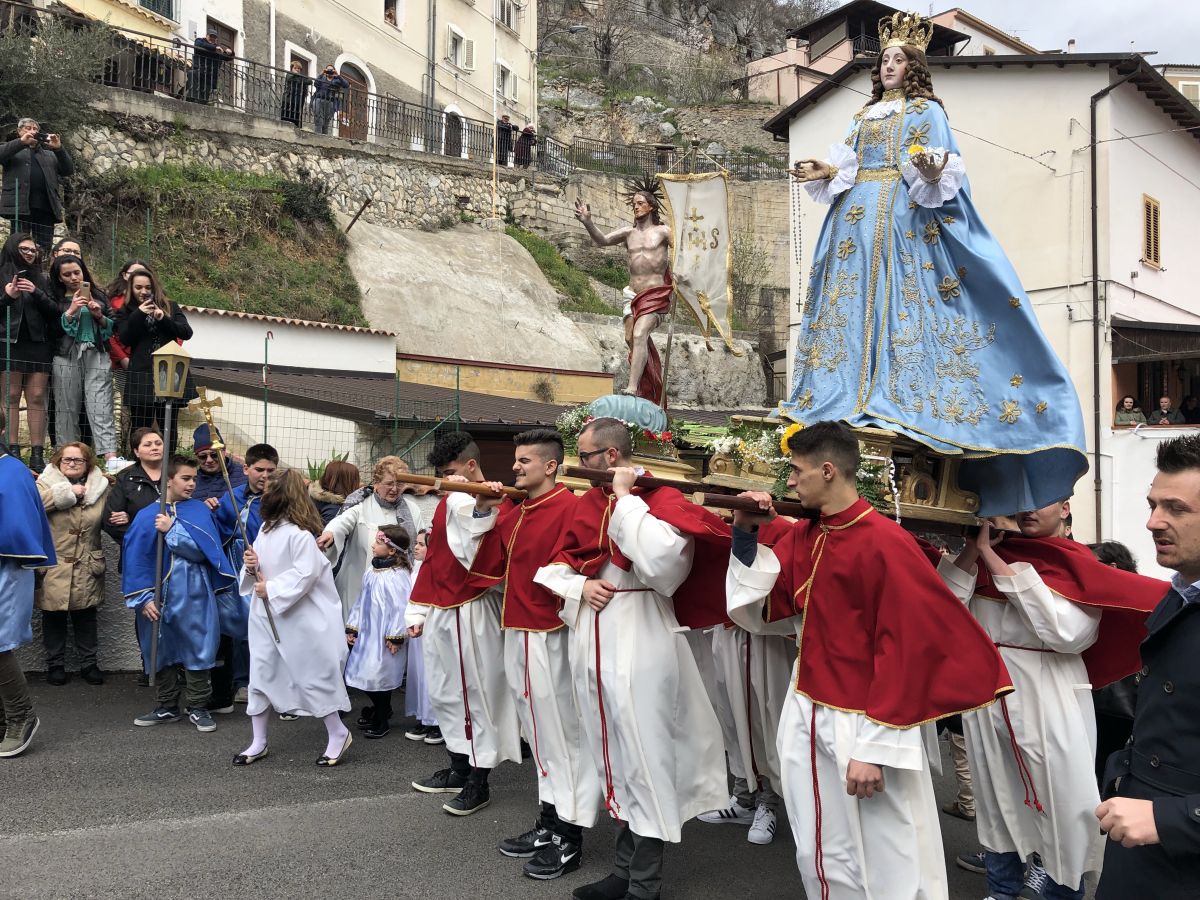 The biggest event is held in Piazza Garibaldi (the largest square in Italy) in Sulmona. The first ever photos of this event are believed to be from 1861 but historians state it could have started as early as the 1600s. 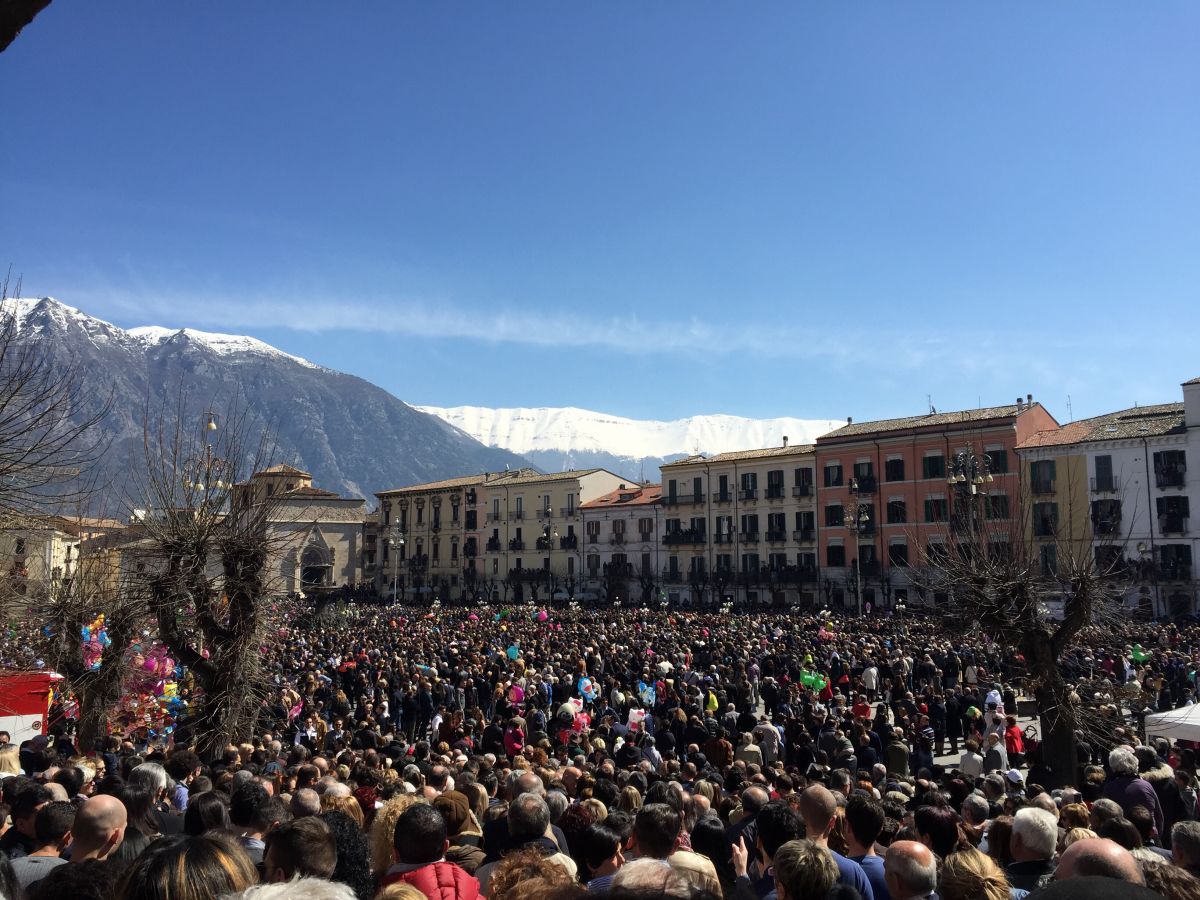 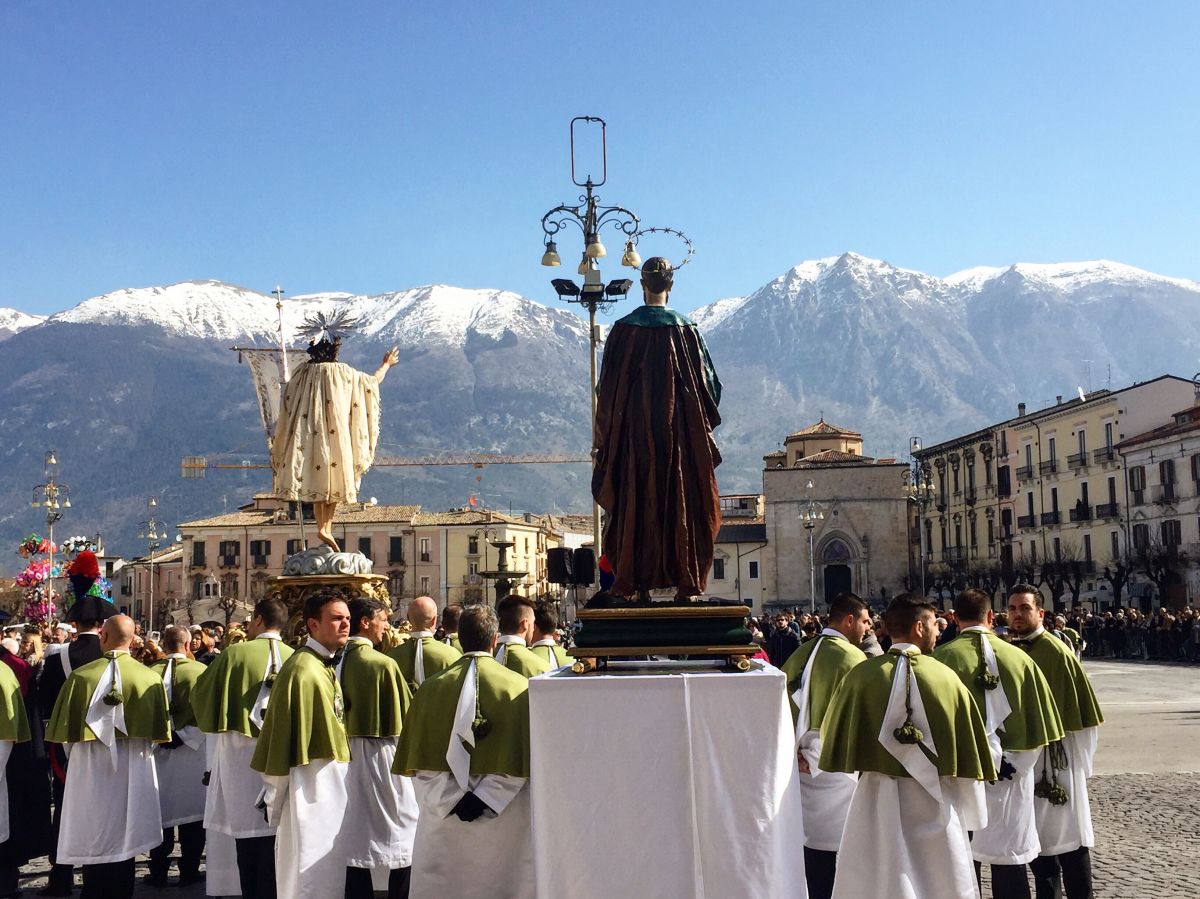 For me, traditions like these are about the spirit of community. In fact, communities in this area are so superstitious that they believe if the annual Madonna che Scappa isn’t a success, an earthquake (in this highly seismic area of Italy) is imminent. And when it turns out as planned, they hug, cry and rejoice.

I hope that Italian towns – especially the smaller and struggling ones – will keep these traditions alive for generations to come.

Oh and in case you’re wondering what I ate on Easter Sunday here are some pics: 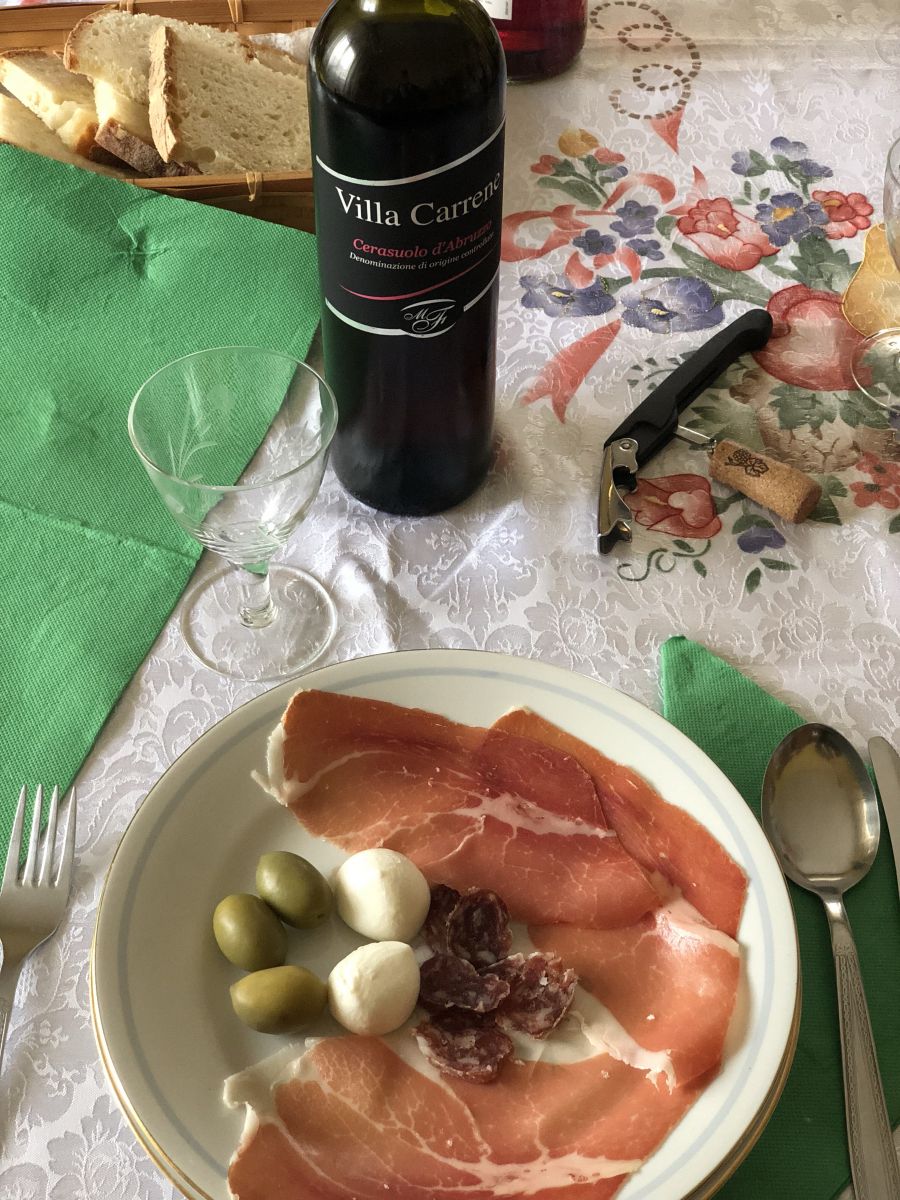 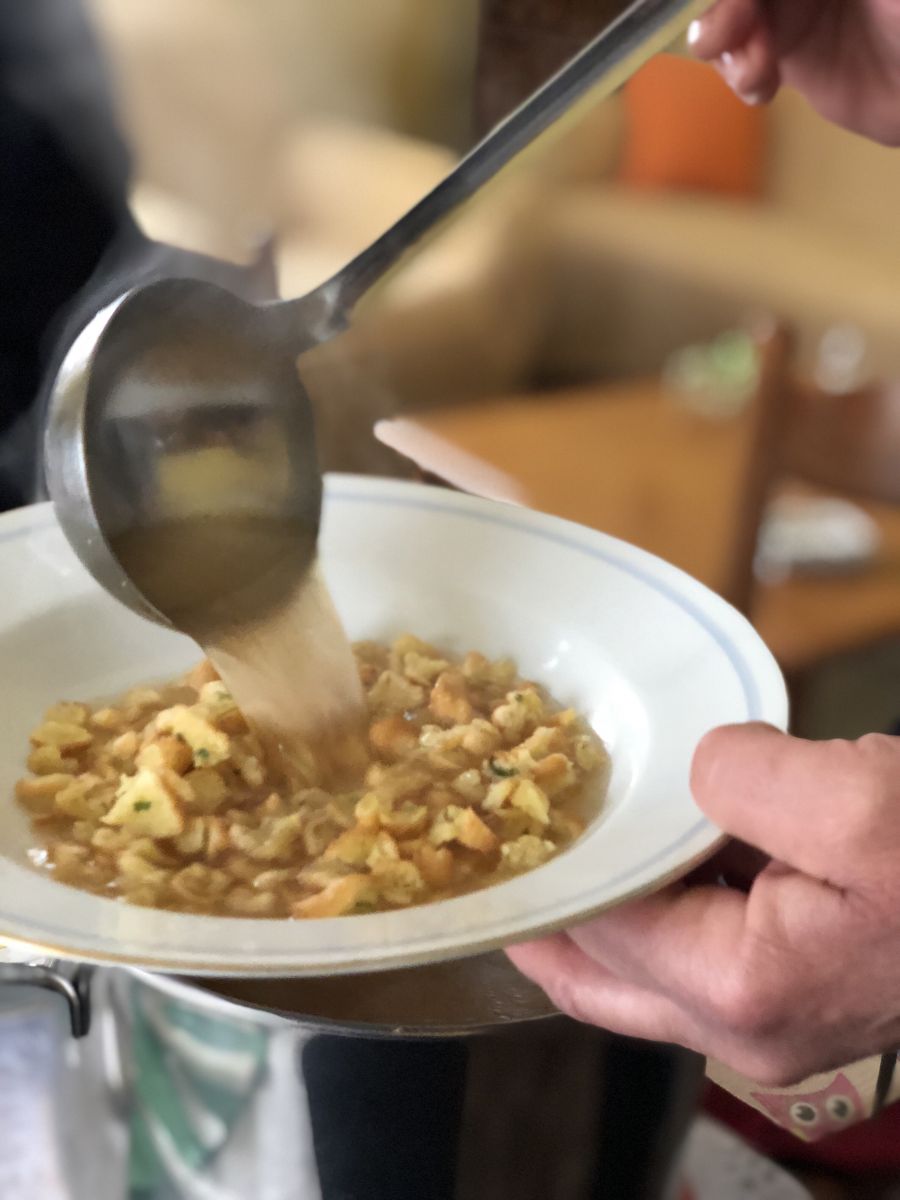 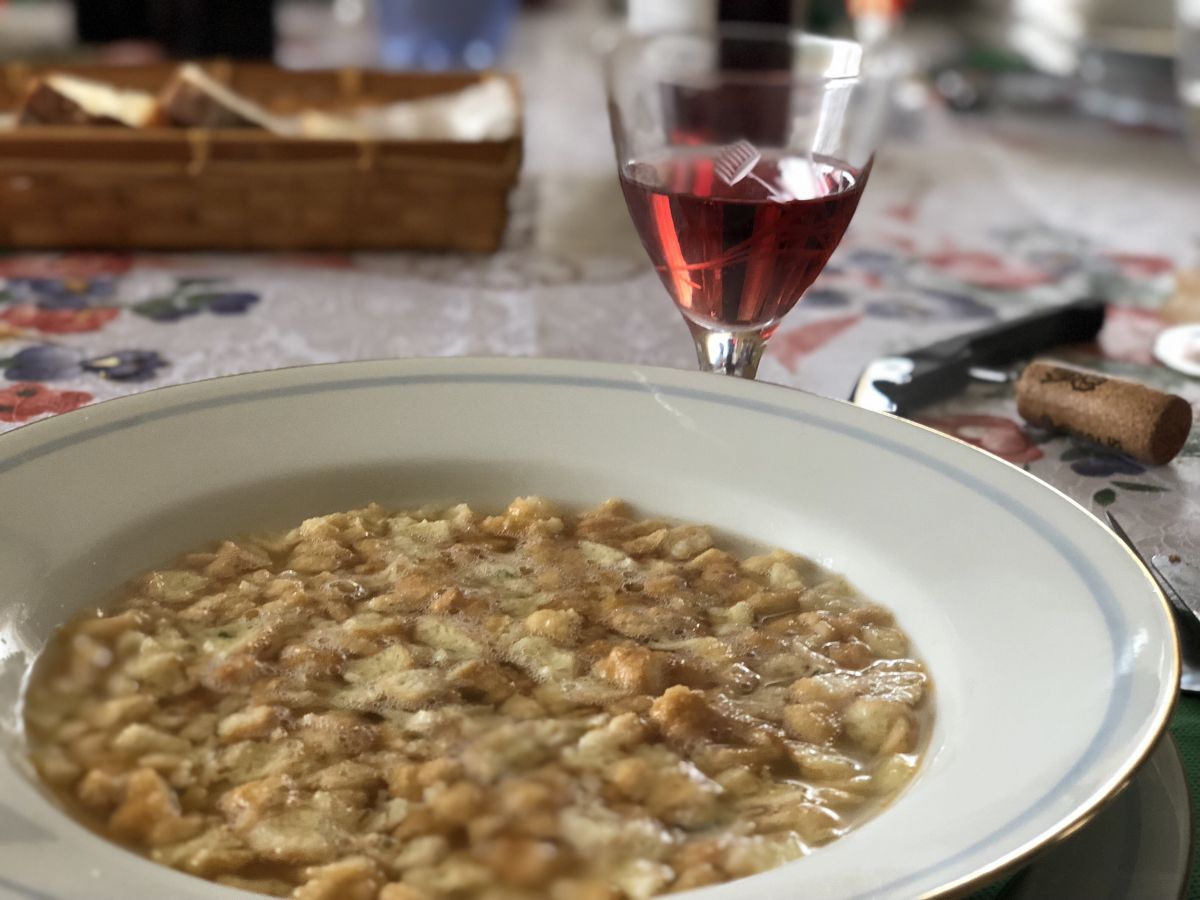 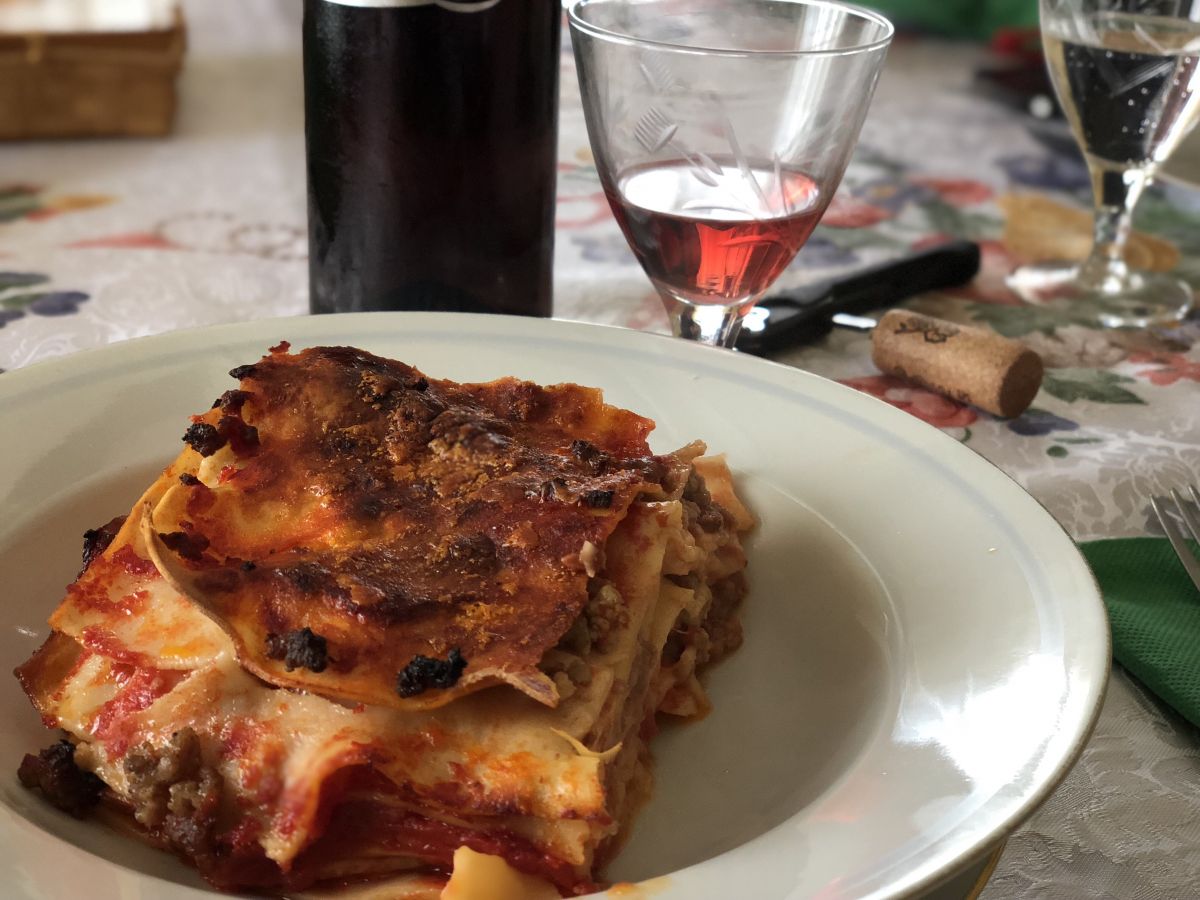 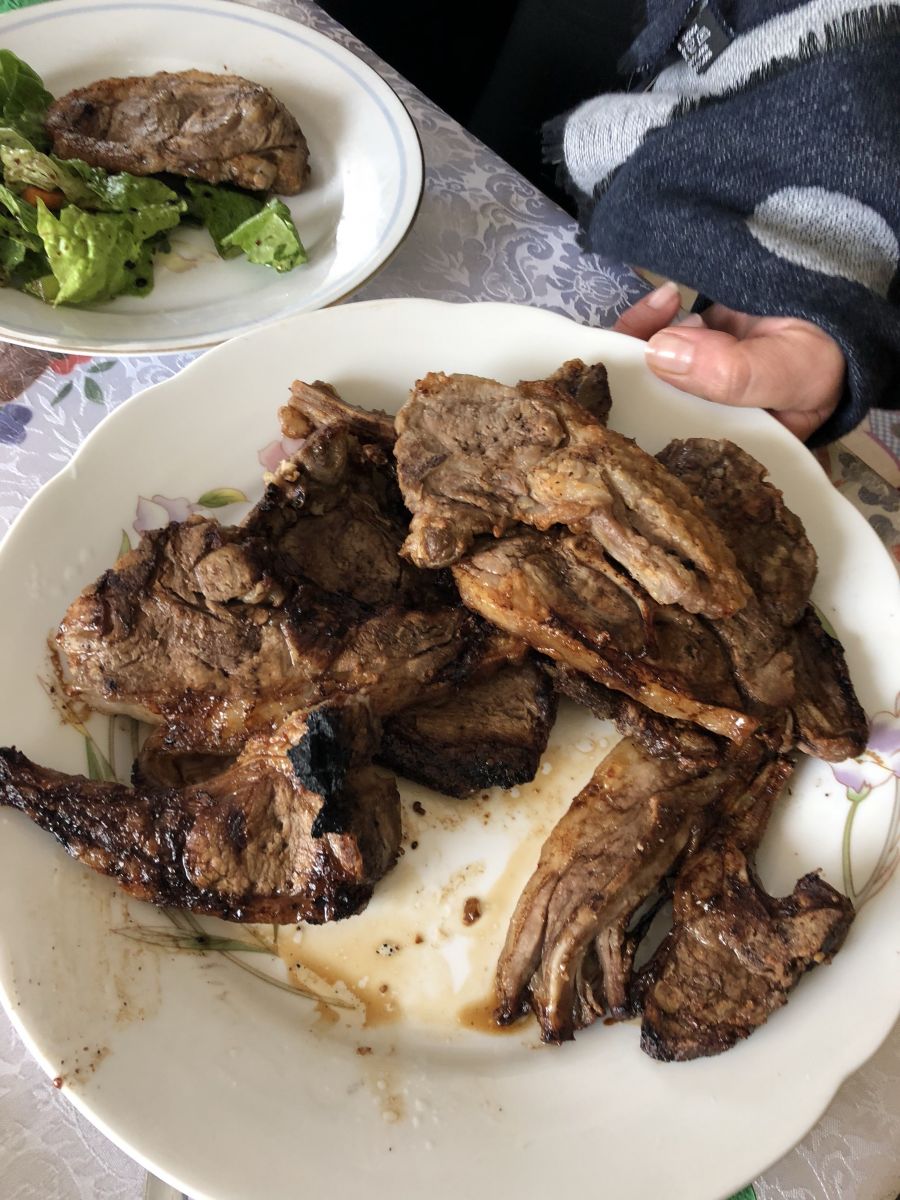 Signing off from Abruzzo (having eaten – if at all possible – a little too much lamb!)