There’s a real problem with exploring Italy and all it has to offer.

It’s the same problem I face in Rome. Getting to know it as a traveller over the course of 15 years and living here for 4 – there’s simply too much to see!

I keep ticking things off my list and adding threefold as I go. It’s never-ending and this is what I love about it the most – there are no bounds to this journey and it’s a continuous feast for the eyes and soul.

Those of you who are travellers will completely understand.

Just like my thirst for life discovery and learning can’t be satiated, nor can my love for exploring Italy. From the lakes to the beach, the countryside to the cities, towns and hamlets.

While I’m a self-confessed city loving girl, I do enjoy getting to the countryside often and recently explored a part of Lazio that I hadn’t even heard about until about a year ago.

Located about a 1.5 hours drive south-east of Rome, towards the Abruzzo border, la Ciociaria refers to a series of towns that come under the provincial bounds of Frosinone and is an area that is rich in history, architecture, art and culinary traditions.. And fashion too! Le ciocie (large leather soles with straps) were were the ancient footwear around here and hence, the name Ciociaria.

While the area doesn’t really have a defined border (or historical identity for that matter), it is off-the-beaten traveller path (which provides exposure to an abundance of local and authentic experiences), easy to access from Rome and is where life truly slows down to a bit of a crawl.

With rolling green hills, a quality DOCG protected red wine and a culinary culture and history that remains the envy of the region, anyone exploring Ciociaria could be forgiven for thinking they’re in Tuscany, Umbria or any other more well-known region of Italy.

Here are some things not to be missed:

The Abbey of Montecassino

This hill (around 130km high) was where the Battle of Montecassini took place. Bombed by allied forces in 1944, then rebuilt after the war, it has a long history of battle, destruction and resilience. It is also home to the sacred relics of St Benedict who is the patron saint of Europe.

What to look out for: The Basilica which is adorned with mosaics is where the relics of Benedict and his sister Scholastica are enshrined. And the views!

The old town of Alatri sits within a double ring of megalithic walls. There are two intact gates to the old city, one of which is Porta Maggiore which features a monolithic lintel. The main town square is Santa Maria Maggiore and features a church of the same name and pretty fountain.

What to look out for: The 5th century Church of Santa Maria Maggiore which was built on the ruins of the temple of Venus. Another must see is the 12th century Fresco di Cristo nel Labirinto (the Labyrinth of Christ) which represents the journey of pilgrims from Rome to Jerusalem, often via Alatri. With only one entry and exit to the depicted labyrinth, it’s a symbolic ode to religious pilgrimage, in that once commenced it must be completed.

Between the 12th and 13th century, four men who would later go on to become Popes, were born in Anagni, hence the nickname: the city of Popes. It is known for the famous ‘papal slap’ (schiaffo di Anagni) which refers to the imprisonment of Pope Boniface VII in the early 1300s. He was allegedly slapped by his captors and once released, died 3 weeks later in Rome. There has since been much controversy and speculation about the circumstances of his death. Some of the great leaders of Ancient Rome also chose Anagni as their home (from Caracalla to Marcus Aurelius) – just to give you an indication of its geographic and historic importance.

What to look out for: The Papal Palace (otherwise known as the Palace of Boniface VIII) is where the famous papal slap was said to have taken place. The Cathedral is also an impressive example of Romanesque, Gothic and Byzantine architecture. 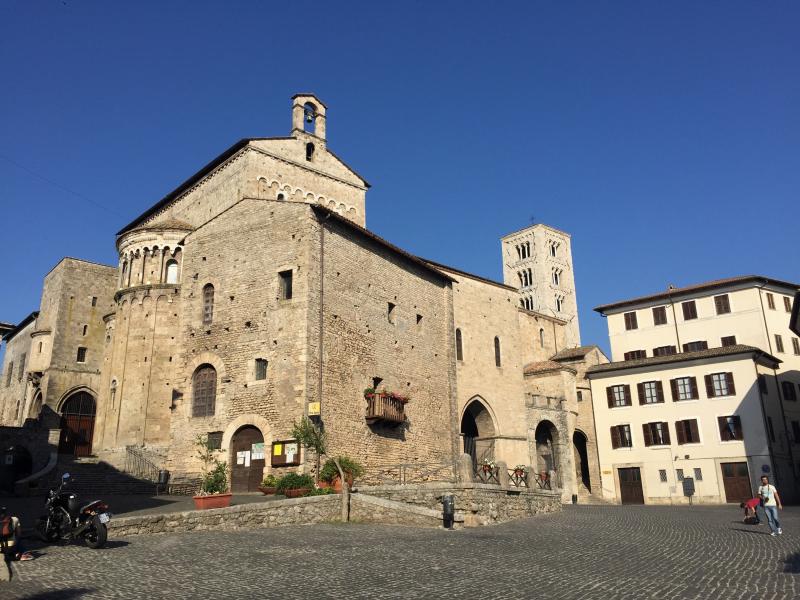 Probably the Ciociarian town with the greatest historical, artistic and cultural heritage, Veroli is a pretty mix of squares and cobblestone alleyways and Baroque, Romanesque and Gothic architecture influences can be seen throughout.

What to look out for: The Church of Santa Maria in Solame is named in honour of one of the three women said to have attended to Jesus Christ during his crucifixion. It also features a staircase for pilgrims to climb on their knees to signify their dedication and sacrifice (la Santa Scala) – together with those of Rome and Jerusalem, it is one of only three in the world. Another important site is the Fasti Verulani from the 1st century AD – a unique roman calendar which represents Veroli’s ties and alliance with Ancient Rome. It can be found in the courtyard of the Casa Reali and a replica in the Veroli Archeological Musuem.

Located less than 10km from Veroli, the 13th century monastery is a fine example of early gothic architecture and in 1874 it was officially declared a national monument. It features vaulted ceilings, pretty columns and stained glass windows.

What to look out for: The monks of Casamari and their gregorian chanting is quite beautiful and and the museum which houses a number of ancient roman relics is worth a visit.

This ancient Ciociarian city dates back to at least the 7th century BC. Home to Cicero, Domenico Mastroianni (ancestor to Marcello) and Marco Agrippa, the architect of Rome’s Pantheon.

What to look out for: Given Arpino sits some 450 metres above sea level, on approach to the old town you’ll see some spectacular views of the Ciociaria territory. Built on the site of an ancient Pagan temple dedicated to Apollo, the church of San Michele Arcangelo is also worth a visit as is the town square with the statue of roman philosopher Marco Tullio Cicerone who was born in Arpino. Not far from here are the walls to the ancient Acropolis or fortified village of Civitavecchia.

The island of Liri is an inland island and the only town in Italy which has two waterfalls running through the historical centre.

What to look out for: The Liri River is said to have split and then rejoined, thus the creation of a small island. The main waterfall (Cascata Grande) can be seen from a bridge as you drive into the town centre and the site is purely breathtaking.

How to get there:

Driving is the best way to explore this region. It’s a 1.5hour drive south-east from Rome. There are also regular train services from Termini station which take approximately 2 hours (with a series of connecting bus services from Alatri, Fiuggi and other towns).

Famous for its natural springs (and Fiuggi water which you might even see in trattoria tables around Rome), Fiuggi is a great base for exploring the towns of Ciociaria. And while there are a range of accommodation options here, you can’t go past the luxury spa hotel, Grand Hotel Palazzo della Fonte. Part of the Leading Hotels of the World group, this elegant five star property features over 150 stylishly appointed rooms (some of which feature a balcony or private terrace), an award winning restaurant and full service spa facility with indoor and outdoor pool, sauna and Turkish bar and a full suite of body treatments. Rates for a double room start from €130.

What and where to Eat:

The entire area is renowned for its rustic homestyle cuisine which honours ancient culinary traditions and showcases the very best local produce. Cesanese red is produced here and even DOCG protected. For more information on dining, read my guide, read my post: Ciociaria in Lazio: a food lover’s delight.